Ukrainians in Carlow: ‘The resilience of the children really gets me’ 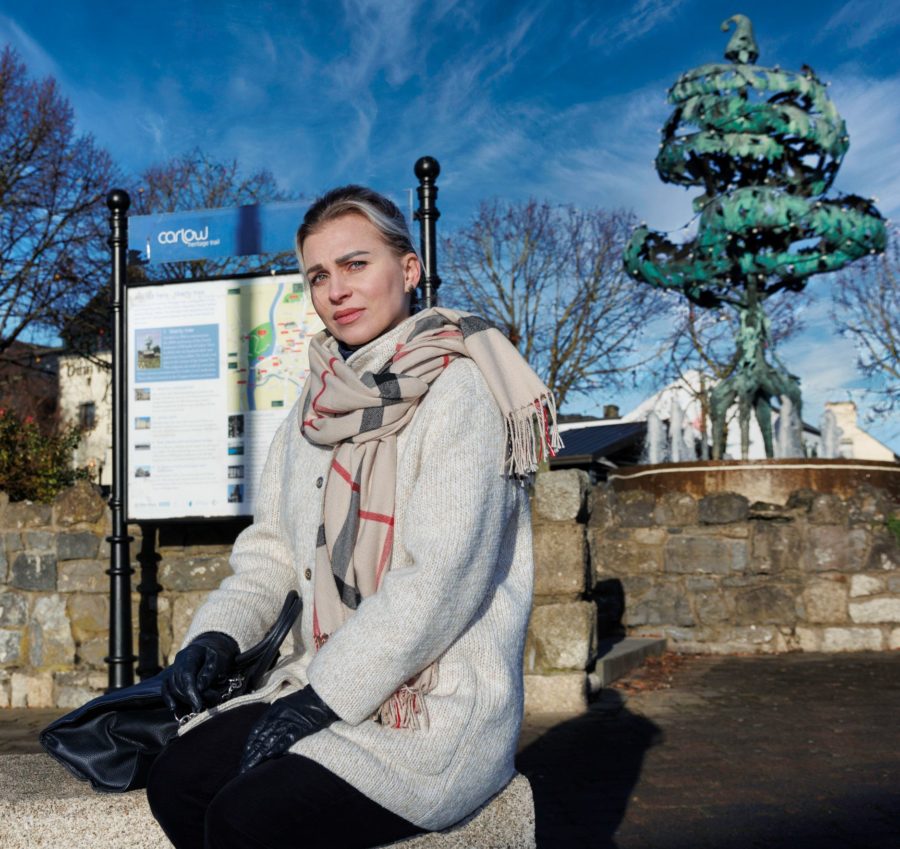 Olena ‘Helen’ Turkenych: ‘I do my best to help Ukrainians in Carlow in the way I can’
Photos: michaelorourkephotography.ie

THE resilience of Ukrainians in Carlow can be seen in how they are doing their best to live their lives despite the harrowing circumstances that drove them to come here.

With their lives turned upside down and separated from their families, some of the newest arrivals in Carlow have begun working with local agencies, pharmacies, banks, cafés and bars.

Mother-of-two Olena Turkenych works as a translator for Carlow County Development Partnership, which is spearheading the local humanitarian effort for refugees. Olena, who lives in Cobden Hall in Carlow College with her husband Anzor, helps dozens of her fellow countrymen and women every day with translation, with forms, getting PPS numbers, registering with health services and helping to find school places with the Department of Education.

The vast majority of Ukrainians have limited or no English, so translators are vital. The language barrier is the single biggest challenge in navigating their time in Ireland, especially in finding employment.

Olena also teaches as part of the development partnership’s Fáilte Isteach programme, which provides English classes once a week to Ukrainian refugees, but it is hoped to expand this to twice weekly.

“Without English, Ukrainians will find themselves struggling with GPs and other things,” she said. “I do my best to help Ukrainians in Carlow in the way I can.”

Olena said that beyond her duties at work, she tried to give advice to Ukrainians on how to navigate Irish life by encouraging those who are in tough situations.

Olena felt it her duty to help Ukrainians through their time in Carlow as they hope to get back to their homeland. “That’s my contribution to Ukraine’s victory,” she said.

Mariia Dokkhaik (21) from Kharkiv works as a welcome adviser with Bank of Ireland in Carlow. Mariia arrived at the Ballon accommodation hub in April, before moving to a guest house in Carlow. She made friends from Tullow and then moved to the town to rent in recent months. Mariia heard that Bank of Ireland was looking for Ukrainian speakers and turned up in person at the bank to apply.

Mariia Dokhniak: ‘I started smiling at strangers on the street’

Last February’s invasion is the second time she has been forced to flee her home due to Russian aggression, as her family was forced out of the Luhansk region of eastern Ukraine in 2014, which left a lasting impact on her. Mariia left Ukraine, as she was determined to live her life. It is an extraordinary act of resolve and achievement, but Mariia brushes it off.

“I think I’ll only realise what I have done five years later, when I look back. Now I don’t really think about it.”

The happiest Mariia has been was when she made friends with group of Ukrainians and eastern Europeans. She was out doing activities, being a young person.

However, it’s sobering to hear what she misses most about Ukraine. “It’s not a thing, but a feeling; it’s like missing your past,” she said.

Olena added that it was proving difficult for Ukrainians to be separated from their families and loved ones.

“For some Ukrainians it’s a big challenge. They hope to go back to Ukraine soon,” she said. “For me, it’s not going to be as soon as some expect.”

To the forefront of efforts in supporting Ukrainians has been the Carlow County Development Partnership, which set up a Ukrainian response team. The team, which is based on Barrack Street, meets new arrivals and provides them with a bag of essential items and information. It also provides help for refugees to apply for PPS numbers, medical cards, to provide information with INTREO and link in with the HSE and Department of Education’s REALT programme to secure school places. The team has also assisted Ukrainians with accommodation issues on health grounds.

Apart from helping with the Ukrainians’ basic needs, the development partnership delivered selection boxes to celebrate St Nicholas’s Day, a very special day for Ukrainian children, in early December, along with bags of toiletries for teens.

“It’s very important not just to provide the basic needs for Ukrainians but help them have full lives and enjoy it,” said Olena.

“The resilience of the children really gets me. When we go out to, say, Ballon, the children are playing games as normal … mixing. They start school … settle in so well. It’s lovely to see. When the kids are doing well, it helps the mums and dads to settle.”

Val recounted how one little Ukrainian girl recently had her first day of junior infants at a school in Carlow town. “She headed in on her own. Never cried. She was so excited to start school. I think her mam and dad were more upset than she was. She loved it.”

Still, the homesickness is ever-present for many Ukrainians and has caused great distress. There are many tears and sleepless nights. Their future is uncertain, but they go on. They have to.

***The Nationalist*** talked to Mariia in a café in Carlow town, and a woman sitting nearby couldn’t help but comment after hearing her story.

“You are a strong young woman, don’t you forget it.”

Maybe we shouldn’t forget it either.

Filed under: Ukrainians in Carlow

Ukrainian accommodation providers in Carlow have got over €5m

Only two Carlow pledged properties have been allocated to Ukrainians

50 Ukrainian refugees settle into their temporary home in Ballon