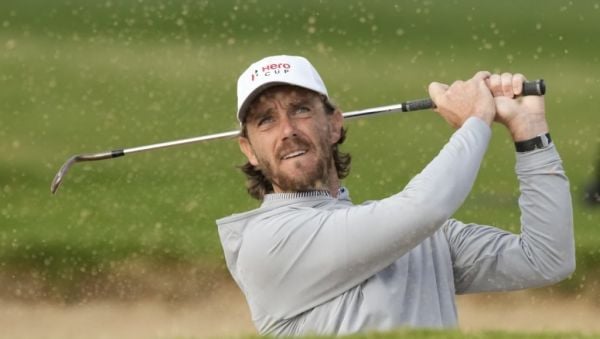 Continental Europe will take a two-point lead into the final day of the Hero Cup after shading the Saturday afternoon foursomes.

Francesco Molinari’s men were a point ahead of Great Britain and Ireland overnight and held on to that slender advantage when the teams took 2.5 points each from the five foursomes matches on Saturday morning.

The afternoon session then finished 3-2 to Continental Europe to give them an 8.5-6.5 cushion ahead of the Sunday singles at Abu Dhabi Golf Club.

GB&I captain Tommy Fleetwood, who lost the top match on Friday, stepped up with two wins from two on the second day. He linked up with Tyrrell Hatton to see off Sepp Straka and Thomas Detry in a morning match that went to 18 before partnering Jordan Smith to a 2&1 win over Alex Noren and Thomas Pieters.

Three birdies in their last five holes for Callum Shinkwin and Matt Wallace sealed a 2&1 win over Antoine Rozner and Adrian Meronk but the other three afternoon games went Continental Europe’s way.

Molinari, like his friend Fleetwood, led by example on day two, partnering Nicolai Hojgaard for the third match in a row and making it 2.5 points from three by beating Ewen Ferguson and Richard Mansell 2&1.

Elsewhere, Detry holed a long birdie putt on 17 to put him and Straka one up on Shane Lowry and Hatton, and they held on for the point before Victor Perez and Guido Migliozzi ended Robert MacIntyre’s hopes of a third straight victory with a 2&1 triumph over the Scot and Seamus Power.

Fleetwood said: “In the morning, there was some amazing golf played and literally as guys start fatiguing and they have to get themselves back up for the afternoon, the standard of golf changes and it’s more mistakes, and it’s really important to keep your body language up and push all the way to the end. I was proud of how our guys did that.

“A couple of matches could have gone either way. We ended the day two points behind, but two points behind is fine and we have a full singles session to go. We can reflect on today and we’ll all sit in the team room and we’ll be talking about our rounds and everything, but overall we go out and get a fast start tomorrow, we’re straight back in the game.”

Molinari is determined not to let that happen. He said: “Well, we need to win tomorrow’s session. We’ve done a great job winning two sessions out of three, and halving the other one. So we need to go out and win the session.

“Two points is nothing. We have been in situations where much bigger margins were eroded. But I’ve got full trust and confidence in all the other nine guys, so I’m looking forward to the challenge of tomorrow.”