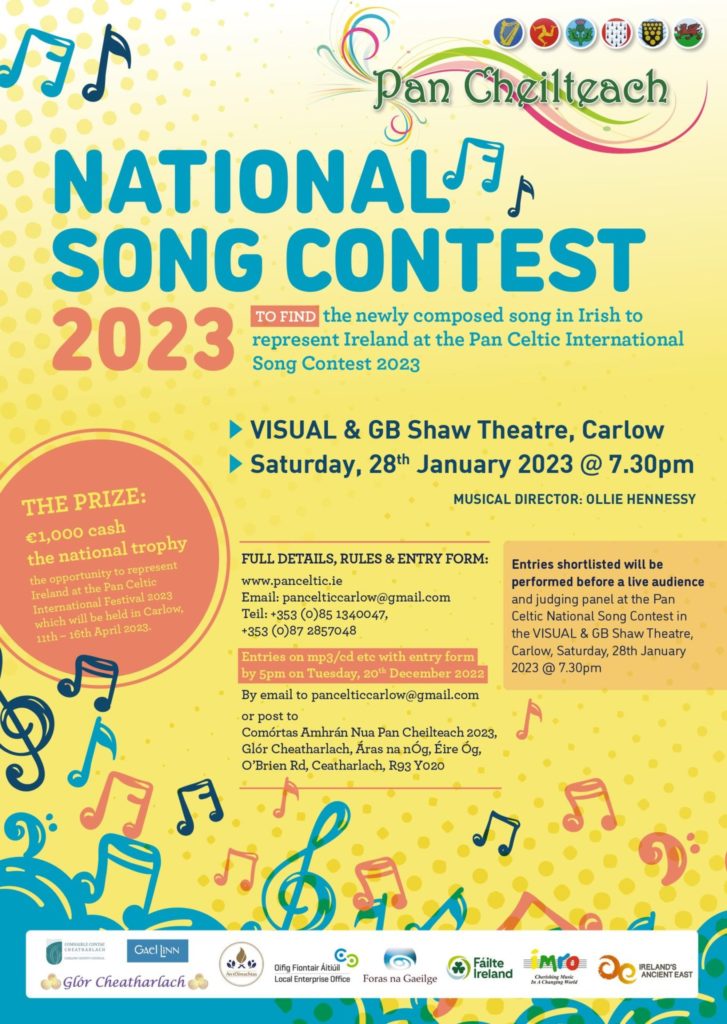 CARLOW is gearing up for the live final of the Pan Celtic National Song Contest 2023. Following a break of three years due to Covid-19, the song contest is set to return this year and will take place in the George Bernard Shaw Theatre at Visual on Saturday 28 January.

From a total of more than 30 entries, 16 newly-composed songs in the Irish language have been shortlisted for the live final and the finalists will go head-to-head for the top prize of €1,000 as well as the chance to represent Ireland this April at the Pan Celtic International Song Contest.

Three well-known names from the world of music have been announced for the judging panel – Emer O’Flahery, a winner of both the Pan Celtic national and international contests in 2017 with her song Taibhse; local well-respected singer/songwriter and musician Fiach Ó Muircheartaigh; and highly acclaimed singer Aoife Scott of the famous Black family.

The 16 songs which have made it to the final cross a number of genres ranging from rock, pop and folk to traditional and classical, making for what promises to be a most enjoyable event.

The only Carlow song this year is Cion cairde by the group encÓre. The lyrics are by local Irish language enthusiast Melíosa Breathnach, while composer of the music is local primary school teacher Clár Ní Dhuinn. Both Melíosa and Clár have collaborated previously on musical productions with their pupils at Scoil Mhuire gan Smál.

encÓre is a vocal group from Co Carlow comprised of ten female singers and musicians. All were previously members of children’s choirs Carlow Young Artists Choir and/or Aspiro, directed by Mary Amond O’Brien.

In 2021, the group decided to reform and begin singing together again, thus the name “encÓre”. Mary Amond O’Brien is still at the heart of the group, continuing to encourage and mentor them.

encÓre will surely have and welcome big local support when they take to the stage flying the flag for Carlow on 28 January.

Kilkenny also has a song in the final. ***Tonnta na mBréag*** is composed by Éanna Ó Casaide and performed with his siblings Sadhbh, Síofra and Ruairi, who make up Grúpa Burnchurch. These talented young musicians write their own songs. Specialising in harmony singing, they are extremely excited about their newly-composed song and look forward to showcasing it at Pan Celtic.

The Pan Celtic national song contest is organised by Glór Cheatharlach. Music director as usual will be Carlow’s very own Ollie Hennessy, backed by the magnificent Pan Celtic House Band. Guest artist on the night will be Eric de Buitléir who, in his own inimitable style, will treat the audience to a taste of jazz.

The song contest is kindly supported by main sponsors IMRO and Carlow County Council and the Enterprise Board as well as Gael Linn, Glór Cheatharlach and Pan Celtic.

Three prizes will be awarded on the night – €100 for third place, €200 for the runner-up, with the top prize of €1,000 and the Pan Celtic National Song Contest trophy going to the winner.

The winning song will represent Ireland at the International Song Contest, which will take place during the Pan Celtic Festival in Carlow next April.

Tickets for the not-to-be-missed event on 28 January at just €12 are on sale at the GB Shaw box office and will also be available on the night. Doors open at 7.30pm, with the show kicking off at 8pm.