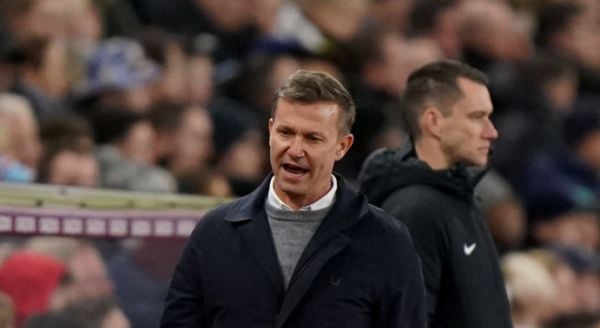 Boss Jesse Marsch dismissed any growing pressure after fans called for his sacking as Leeds lost at Aston Villa.

Leon Bailey’s early strike and Emi Buendia’s second-half header gave Villa a 2-1 win with the wasteful visitors letting them off the hook.

Rodrigo had a goal disallowed and shot cleared off the line while Jack Harrison and Wilfried Gnonto were expertly denied by Emi Martinez before Patrick Bamford’s consolation.

It extended Leeds’ winless run to seven games in all competitions – they have won just twice since August – to leave them two points above the Premier League relegation zone and away fans chanted for Marsch’s removal.

He said: “I’m focused entirely on our team. I understand the pressures which come with the expectation at a club like Leeds. I’m more positive than I’ve ever been since I’ve been here.

“When the team doesn’t win the coach is always going to take the heat but I can handle that.

“There’s no panic, it’s really trying to kick start the way we want to play. If we do that we have enough quality and intelligence to achieve our goals.

“In sport sometime you can be on top and lose. This is our most complete performance since I’ve been here and the best example of the way I believe the team can play. I’m in a positive place with our group.”

Bailey – who missed a late open goal against Wolves last week and left the pitch in tears – opened the scoring after three minutes when he curled in following Boubacar Kamara’s quick break.

It only served to inspire Leeds who rallied with Rodrigo thwarted by Martinez before Harrison scuffed the rebound against the post.

The visitors continued to pour forward and Rodrigo came close to levelling when he rounded Martinez only for debutant Alex Moreno to clear off the line.

A minute later Harrison should have levelled when he met Luke Ayling’s cross but Martinez threw himself in front of the shot to smother and Ashley Young deflected Gnonto’s follow up over.

Rodrigo had a goal disallowed before the break and Young needed to be alert to deflect Brenden Aaronson’s shot over in the second half.

Martinez was at full stretch to turn Gnonto’s curler away before Villa grabbed a surprise second when Illan Meslier parried Bailey’s drive and Buendia nodded in.

It was initially ruled offside but VAR showed the forward was clearly on to net his second goal in four games.

Danny Ings went close to a third before Bamford netted with eight minutes left following more good work from Gnonto but it was not enough.

“It was a tough match but the performance was different in the first and second half. In the second half we controlled it better with good positioning and keeping possession longer,” said boss Unai Emery, with Villa 11th in the Premier League.

A message from the match-winner! 🔥 pic.twitter.com/Q277GBzDt1

“I’m really happy with Leon. In the last match against Wolves he had two chances and he was thinking he had a responsibility to score. We were helping and supporting him to give him confidence.

“In the first half we were a little happy but confused because we weren’t playing very well and had less chances than we wanted. They want to get the ball forward and are so direct. We didn’t control the first half well.

“We changed something, we tried to keep ball possession longer and that was the key. After it we broke their pressing and had spaces to attack.”