Leinster sweep aside Gloucester to progress in Champions Cup 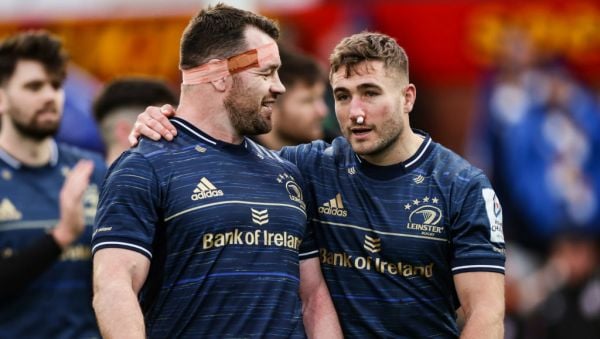 Leinster cruised into the Heineken Champions Cup round of 16 after sweeping aside Gloucester 49-14 at Kingsholm.

The four-time European champions were never seriously threatened as they followed up a 57-0 victory over the same opponents before Christmas with another comprehensive success.

Fly-half Ross Byrne converted all four scores and, although Gloucester claimed two penalty tries from collapsed mauls, it was damage limitation from an early stage.

And Ronan Kelleher added a seventh Leinster try on the stroke of full-time, converted by Harry Byrne, leaving Gloucester to reflect on their heaviest home defeat in top-flight European competition.

With eight teams qualifying from each of two pools, though, Gloucester could still reach the Champions Cup knockout phase if they beat Bordeaux-Begles in France next weekend.

But for Leinster, it is already a case of mission accomplished in terms of progressing from their group, and a record-equalling fifth European title is certainly not beyond them on current form.

Gloucester showed two changes from the team edged out by Gallagher Premiership opponents Saracens, with George Barton replacing full-back Lloyd Evans and Seb Atkinson starting at inside centre instead of Giorgi Kveseladze.

Centre Garry Ringrose returned to captain Leinster, while prop Cian Healy was set to make his 100th appearance for the province after being named among the replacements.

Leinster were off and running inside four minutes, slicing open Gloucester’s defence from a short-range lineout as Larmour touched down unchallenged, with Byrne’s conversion making it 7-0.

Gloucester struggled to cope in the face of such pace and intensity and matters deteriorated for them midway through a one-sided opening quarter.

Atkinson was yellow-carded by French referee Pierre Brousset for a technical infringement and Leinster ran the resulting penalty, creating a try for Ala’alatoa that Byrne converted.

Gloucester needed a response and it arrived 15 minutes before half time when they drove a lineout to within sight of Leinster’s line.

Although Gloucester’s forwards could not get the ball down, Brousset decided that Leinster had illegally pulled the maul down, awarding a penalty try and yellow-carding visiting prop Andrew Porter.

But just when Gloucester thought they might be back in the contest, Leinster once again showed a ruthless edge off first-phase possession, with scrum-half Jamison Gibson Park’s pass finding Osborne, who scored following a jinking 20-metre run.

Byrne converted and Leinster secured a bonus-point on the stroke of half time with their fourth try.

It was another close-range effort with an emphasis power as Doris touched down and Byrne’s conversion opened up a 21-point interval advantage.

Leinster showed no sign of slowing up after the break and it took just six minutes for them to score a fifth try, courtesy of Keenan’s impressive finish when he rounded opposite number George Barton.

Gloucester, to their credit, refused to throw in the towel and they gained a second penalty try 15 minutes from time after Doris was sin-binned for illegally pulling down a close-range maul.

But Leinster finished strongly and current world player of the year Van der Flier collected a 71st-minute touchdown and Kelleher also crossed, completing an impressive afternoon’s work, with Gloucester ending the match a player down after fly-half Santiago Carreras was yellow-carded for a deliberate knock-on.