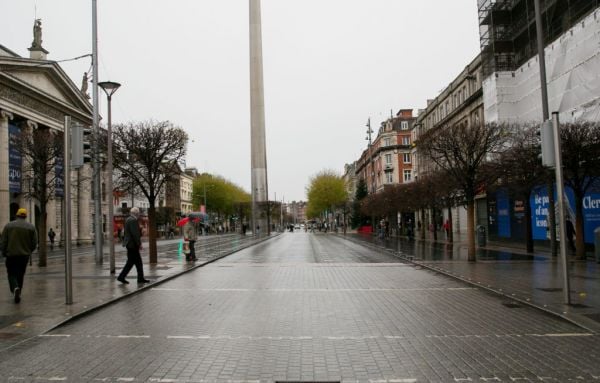 A 30-year-old man arrested for attacking his ex-girlfriend on Dublin’s O’Connell Street has been granted bail.

Yum Xioa Ma, originally from China but with an address at Parnell Street, Dublin 1, was charged with assault, possessing a blade as a weapon and failing to provide his identity under immigration legislation.

She said the assault charge, in this case, can attract a sentence of up to six months and a €1,000 fine.

The contested bail hearing was told that the accused allegedly “grabbed, pushed and pulled the injured party” at O’Connell Street on Friday.

Garda Buggy told Judge Michele Finan that she witnessed the incident and the accused “physically pulling her”.

She said the woman was crying in front of pedestrians and whispered “help me” to the garda.

It was alleged the accused, who is yet to indicate a plea, had one hand in his pocket and removed it, at which gardai found a Stanley blade on him.

Garda Buggy told the court the complainant outlined a relationship of coercive control, and she was afraid.

It was alleged he used her graduation certificate as an excuse to meet her.

Cross-examined by defence counsel Kevin McCrave, the garda agreed the accused lived and worked in Ireland for five years, had a valid visa, and there was no evidence of him booking a flight.

The barrister said his client, who listened to the proceedings with the assistance of an interpreter, would abide by conditions and not return to China.

Granting bail, Judge Finan said the accused had the presumption of innocence, and she noted the complainant was not in court to give evidence at the bail hearing.

She ordered the accused to sign on daily at a Dublin Garda station, remain contactable by mobile phone, and have no direct or indirect contact with the alleged injured party.

The judge also warned him to hand over any documents belonging to her.

Legal aid was granted before he was released and ordered to appear again in March.

Judge Finan noted gardaí needed time to get directions from the Director of Public Prosecutions.