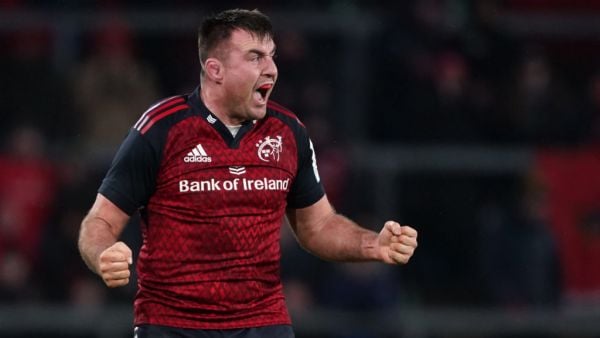 Fourteen-man Munster hung on to claim a Heineken Champions Cup double over Northampton, with Gavin Coombes scoring two first-half tries to help set up a 27-23 win at Thomond Park.

Munster were leading by 17 points when Jack O’Donoghue was sent off for a high tackle on David Ribbans in the 22nd minute, although Coombes’ second try of the game made it 24-0 at half-time.

O’Donoghue had also touched down at that stage, with Joey Carbery booting nine points, but Northampton awoke from their slumber after the interval and will be kicking themselves that they fell short of victory.

Mike Haley’s opening run allowed Carbery to kick the province – 17-6 winners at cinch Stadium before Christmas – into a second-minute lead.

Northampton’s early indiscipline then cost them again as the hosts quickly plundered a try. O’Donoghue sniped down the touchline from a lineout move and then, from another penalty, Niall Scannell’s inviting pass sent Coombes crashing over in the ninth minute.

Carbery converted and was then hit by a high tackle from Saints hooker Mikey Haywood, who first made contact with the fly-half’s chest.

With 28 minutes on the clock, Haley flung a long pass wide to Coombes who stepped inside, sucked in two defenders and fed O’Donoghue to touch down. Carbery’s conversion made it 17-0 but the fast-starting hosts were soon down to 14 men.

O’Donoghue’s shoulder caught Ribbans in the head, with referee Tual Trainini reaching for his red card following a TMO review of the tackle.

Instead of Saints seizing control, Munster dug in and from Scannell’s tapped penalty, a well-supported Coombes drove over to complete his brace.

A crooked Haywood throw blew a late Northampton chance at the end of the first half, following a Lewis Ludlam break, but their direct play on the resumption was duly rewarded.

Smith and Matt Proctor worked the ball wide for winger Freeman to score in the 44th minute, the 20-year-old stand-off adding the conversion and a subsequent penalty to pull it back to 24-10.

The visitors chalked up another seven points before the hour mark, cutting loose from their own half with Rory Hutchinson launching a kick chase. The centre’s counter-ruck allowed Ramm to power his way over, with Smith converting.

Turnovers led to frustration for both teams, with Northampton also left to rue a neck roll on Antoine Frisch when a try looked very likely. Smith did punish Alex Kendellen for not rolling away, making it 24-20.

Replacement Crowley cancelled out that kick and despite Smith’s best efforts, Saints ran out of time. Fittingly it was Coombes, the Heineken star-of-the-match, who forced the clinching turnover from Lukhan Salakaia-Loto.