Willian was really something against Chelsea – Marco Silva 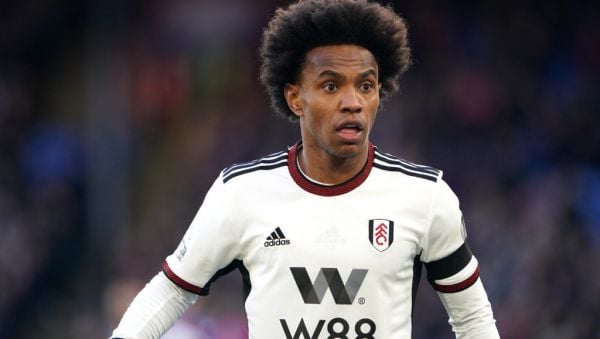 Fulham boss Marco Silva never had any doubts Willian would prove himself a key member of the team.

The 34-year-old was on the scoresheet as Fulham beat west London rivals Chelsea at Craven Cottage on Thursday night to record a fifth straight win in all competitions.

The veteran Brazilian faced questions over his future after leaving Arsenal for a spell back in his homeland with Corinthians and then signing a one-year deal with Fulham.

Silva, though, was always confident the midfielder’s experience would shine through.

“Every week I repeat myself, but I didn’t have doubts about what he can do for us,” the Fulham boss said.

“We had a good feeling from him and he got the same from our football club, the staff and team-mates.

“The quality was always there, and he is a top, top player.”

The Fulham manager told a press conference: “It was important again for him on Thursday night.

“He would have had mixed feelings for sure, because he played for seven years with a blue shirt and now he is playing for the neighbours. He is enjoying the moment.”

While Fulham are in the market for fresh talent during the January window, Silva insists the current group have what it takes to hold their own in the top flight.

“We always try to have competition inside (the squad), because that is the best way for us to grow as a football club,” the Portuguese coach said.

“When the competition is harder, in the training sessions, the players have to do their maximum every single day.

“For sure, it will be more headaches for me to take the decisions (for the team), but it will be much better for us and also make the players better to grow as individuals as well.

“If we can find players with different profile, who can do different things on the pitch, then that is always important.”

Top scorer Aleksandar Mitrovic will be available again at Newcastle on Sunday following suspension, but defender Antonee Robinson will serve his own one-match ban after collecting a fifth booking during the Chelsea game.

Silva has been impressed with the “brilliant job” done by manager Eddie Howe since taking over at St James’ Park.

“Of course they signed top, top, top players and spent a big amount in the transfer market, they have this capacity and Eddie has to be pleased about that,” Silva said.

“But one of the main things that I like is they play with a high intensity on and off the ball as well, then can be so direct.

“Playing in their stadium with their crowd behind them, it will be another very good test for us.”