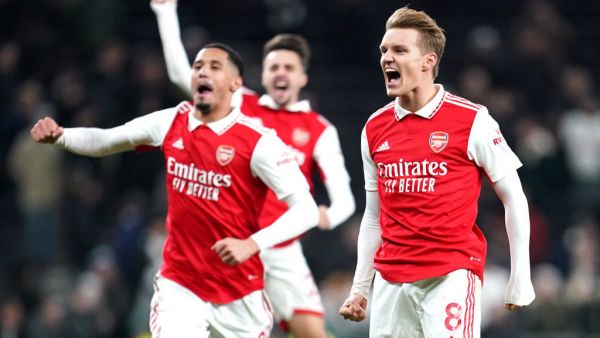 Arsenal move eight points clear at the top of the Premier League with a 2-0 derby win at Tottenham.

Mikel Arteta’s side did the damage in the first half with Hugo Lloris putting through his own net before Gunners captain Martin Odegaard rifled home from 25 yards.

A first double over their north London rivals since 2014 ensured leaders Arsenal capitalised on defending champions Manchester City losing at Old Trafford on Saturday to further raise hope they could win the title again for the first time in 19 years.

In-form Manchester United are Arsenal’s next opponents and they will now hope for a favour from Antonio Conte’s side, who travel to City on Thursday struggling to stay in the top four race and with Harry Kane still one goal short of Jimmy Greaves’ club scoring record.

There were unsavoury scenes at full-time with Aaron Ramsdale appearing to be kicked by a Tottenham supporter who jumped onto the advertising hoarding behind the goal of the South Stand before Arteta was able to lead his players away to celebrate with their own fans.

Both teams had injury concerns ahead of the match and while Dejan Kulusevski returned for Spurs, Rodrigo Bentancur missed out and Bukayo Saka was able to shake off his minor hamstring issue to start for the visitors.

Results elsewhere this weekend only heightened the importance of the match and it did not take long for the leaders to get into their groove with in-form Eddie Nketiah denied by Lloris in the seventh minute.

Lloris’ hesitancy in possession proved the catalyst for the chance and his next involvement produced the opener after another error.

Saka created space by the byline and his cross, which took a slight deflection off Ryan Sessegnon, fooled Lloris, who could only parry the ball into his own net.

It was not the first mistake by the Spurs captain in a big game this season but Tottenham almost levelled instantly when Sessegnon found Son Heung-min inside the area, only for Ramsdale to make a fine low stop with his legs.

It was a fleeting moment of attacking intent from Conte’s side who quickly found themselves back on the ropes.

Lloris saved from Odegaard soon after before Thomas Partey was denied another north London stunner by the woodwork.

Partey, who scored a superb curled effort in the 3-1 win in October, let fly with a volley from 25 yards that thundered against the base of the post after pin-ball in the Spurs area.

A second goal for Arsenal felt inevitable and it arrived eight minutes before the break.

William Saliba won the first ball before Partey and Saka combined to release Odegaard in space and the Gunners captain rifled into the bottom corner from range for his eighth goal this season.

It was fully deserved for the visitors and while Spurs improved, with Kane denied by Ramsdale, it remained 2-0 at the break.

The traditional second-half team were true to their word after the restart with Kulusevski firing over before Kane was denied by another fine Ramsdale save.

Even better was to follow from the Arsenal goalkeeper, who stuck out a boot to deflect a Sessegnon effort wide after a slick one-two with Kane.

Tempers started to boil over when substitute Richarlison had words with Brazil team-mate Gabriel Martinelli and Kulusevski collided with Arteta in the technical area.

Yet those incidents and a flurry of yellow cards only proved to take the sting out of Spurs’ attempted comeback.

Nketiah squandered the chance to seal the points with 21 minutes left when Lloris raced out quickly to save his effort following Granit Xhaka’s pass to keep Tottenham’s faint hopes alive.

Despite Richarlison and Ivan Perisic coming on and Kulusevski testing the excellent Ramsdale late on, Arsenal comfortable saw out the final exchanges to move 14 points clear of their rivals.

However, there were ugly scenes after the final whistle.

After an apparent exchange of words with Richarlison, Ramsdale was on the receiving end of a kick from a supporter. Xhaka appeared to be frustrated by developments, with Arteta stepping in and the Arsenal contingent moving to the other end of the stadium to celebrate with their fans.