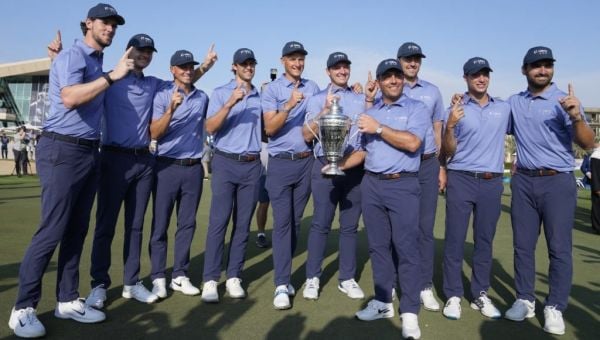 Continental Europe won the Hero Cup as Great Britain and Ireland were unable to recover in the Sunday singles.

Francesco Molinari’s side took an 8.5-6.5 points cushion into the final day at Abu Dhabi Golf Club and built on that by winning six of the 10 singles games to triumph 14.5 to 10.5.

Poland’s Adrian Meronk sank the decisive putt in his one up victory over England’s Callum Shinkwin.

Molinari told Sky Sports: “Amazing, amazing. I can finally relax – the last couple of hours have been tense after finishing my game.

“But yeah, it’s been great all week, super happy for the guys.

“Like I said all week, it’s been very, very easy leading them and being a captain for them.”

Molinari, hero of Europe’s 2018 Ryder Cup victory, led from the front with a 3&2 victory over Shane Lowry.

GB&I captain Tommy Fleetwood and Tyrrell Hatton turned the board red with comfortable 3&2 and 5&4 wins over Thomas Pieters and Antoine Rozner, and Matt Wallace kept them in the hunt with a 2&1 success over Thomas Detry.

But Continental Europe maintained their advantage as Nicolai Hojgaard beat Seamus Power one up, while Victor Perez and Sepp Straka were too strong for Jordan Smith and Ewen Ferguson in their respective 4&2 and 5&4 victories.

It was left to Meronk to sink his birdie putt from more than 30 feet on the 18th green to see Continental Europe home.

Scot Robert Macintyre, beating Alex Noren 5&3, and Guido Miglozzi, with a 4&3 victory over Richard Mansell, produced the final points for their teams.

Fleetwood said: “We obviously came here to win and wanted to do it for each other.

“The first thing I said at the start of the week was ‘your team-mates don’t remember if you play bad, miss a putt or lose a point’.

“But everybody remembers if you don’t give 100 per cent and I couldn’t have asked for any more from anybody this week.

“It’s been an amazing experience for me and I’ve loved playing with my team-mates.

“But they (Europe) clearly deserved it this week, they played the best golf and the winning team makes those moments count.”