Donohoe recuses himself from certain duties and apologises for election ‘mistakes’ 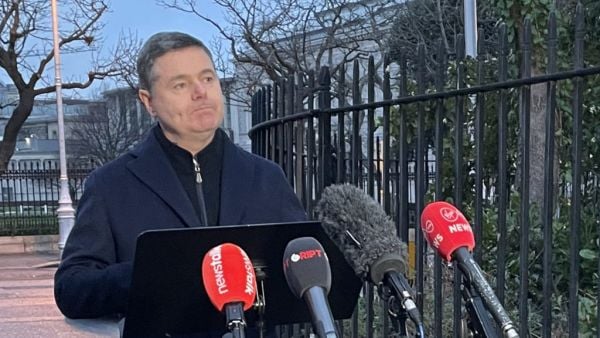 The Minister for Public Expenditure, Paschal Donohoe has recused himself from some of his ministerial duties after it emerged that he did not declare all services paid for during his 2016 general election campaign.

The services relate to putting up and taking down electoral posters, which Mr Donohoe said he believed had been voluntary.

He said he has submitted an application to amend his record with the Standards in Public Office Commission (Sipo), and apologised for the oversight.

“I have spoken to the Taoiseach, to the Tanaiste, to Minister Ryan, I’ve explained the situation to them, and I have apologised for my mistakes,” he said in a statement in Dublin city on Sunday.

“I accepted responsibility for making all supporters aware of their obligations at election time, and the declaration of responsibility sits with me.

“I deeply regret this situation and the role that I played in it.”

The minister addressed the concerns after a complaint was made to Ireland’s electoral authority that he had not declared a donation of services provided during the 2016 general election campaign.

Mr Donohoe said he had received confirmation of this complaint on Friday, though he had been made aware a complaint was likely weeks previously.

Since his ministry involves overseeing the electoral ethics watchdog Sipo, Mr Donohoe said he was recusing himself from making certain decisions in relation to Sipo until it makes a decision.

Giving an account of the sequence of events, the Fine Gael minister said his party’s branch in Dublin Central was offered assistance with his 2016 re-election campaign, in putting up and taking down posters.

“This assistance was understood to be on a voluntary basis. It was provided across four nights during the campaign period, before and after polling day,” he said.

“There were six individuals involved, working in three pairs. Neither myself nor the campaign team paid the people involved, nor was I at that time aware they had been paid.

“For that reason, no cost was attributed to this support on the election expense submitted to Sipo following that election.

“In light of a complaint made to Sipo concerning this support, and the letter from Sipo confirming the receipt of a complaint, which I received on Friday, I have been undertaking a full review of the campaign in recent weeks. In the course of the review, I was made aware that the individuals concerned had been paid for their help in that campaign.

“This was a personal payment by an individual in support of Fine Gael in Dublin Central.

“It was not made using any monies from any corporate entity. The total payment to the people involved was 1,100 euro, of which 917 euro pertains to the campaign period. The remainder relates to work done after election day.”

He said that in retrospect, he should have amended his election expenses form in 2017 after a complaint was made about a corporate vehicle used.

He said: “This was a clear oversight on my part, which I acknowledge and apologise for.

“Having been made aware of the payment to the individuals in recent weeks, it’s clear to me that the value of the labour involved, to the amount of approximately €917, should also have been declared in my election expenses.

“So I have now asked that my election statement be amended to reflect what I now know to include an additional spend on the statement for that campaign of €1,057, reflecting the equivalent commercial value of the vehicle (€140).

He added: “I always hold myself to the very highest of professional standards, and I profoundly regret that this matter was not dealt with directly in 2016. In light of the information that’s now available to me, I’ve taken the steps to address the issue as comprehensively as I can.

“As Minister for Public Expenditure, National Development Plan Delivery and Reform, Sipo is associated with my department, so for that reason, and to ensure that there is full transparency and independence in this matter, I am recusing myself from first – any policy decision on the progression of ethics legislation; secondly, any decision whatsoever with regard to Sipo until the completion of any process with regard to this matter, and I have written to the Secretary General of the department with this direction.”

It comes days after Fine Gael TD Damien English resigned as junior enterprise minister after it emerged he had failed to disclose ownership of a property on a planning application to his local council.

Calls have been made to bolster ethics legislation and obligations for parliamentarians as a result; Sipo has repeatedly called for more resources and powers to oversee standards and ethics in recent years.

Mr Donohoe first became a TD for Dublin Central in 2011, and has been re-elected twice. He was re-elected for a second term as President of the Eurogroup – an informal gathering of finance ministers from eurozone countries – in December.