Jordan Henderson: No good feeling sorry for ourselves amid poor performances 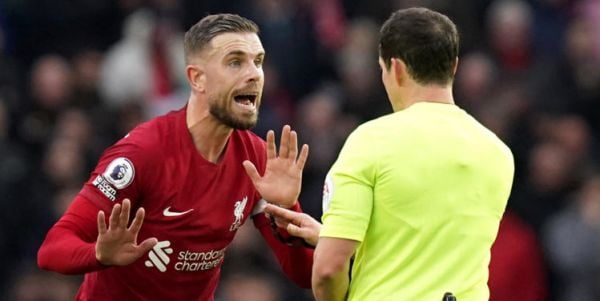 Captain Jordan Henderson admits Liverpool are suffering a lack of confidence but insists players cannot afford to feel sorry for themselves.

Jurgen Klopp’s side slipped to ninth place in the Premier League after their inconsistent form continued with Saturday’s resounding 3-0 loss at Brighton.

The Reds were outclassed at the Amex Stadium and have already dropped 26 points this campaign, leaving them out of title contention and with an uphill task to qualify for the Champions League.

“It’s a real low point for us as a team,” England midfielder Henderson said of the heavy south-coast defeat, according to his club’s website.

“We need to stay together. There’s an honest bunch of lads in there and it’s a tough moment for us as a team, for sure, but we need to get together.

“We all know we can be better individually, collectively, everything across the board.

Speaking of the mood in the dressing room, the 32-year-old continued: “Not good, as you can imagine.

“Pretty low, low on confidence – you can see that when we’re playing – energy levels low, everything.

Manager Klopp accepted blame for another disappointing day in Liverpool’s stuttering season, conceding he could not recall a worse display.

Solly March’s quick-fire double early in the second half gave the Seagulls the advantage their dominance deserved, before substitute Danny Welbeck sealed a comprehensive victory.

The Reds move on to Tuesday’s FA Cup replay away to Wolves, which could result in a swift return to Brighton in round four of that competition, before hosting Chelsea on Saturday.

“We need to stay together and try to change things really quickly because the games are coming thick and fast and we need to try to learn as best we can and show a reaction,”said Henderson.

“It’s important we stay together and come through this, and it’ll make us stronger in the end.”

March has now struck four times in as many top-flight games following a 25-month drought in the league, while Mitoma, who gave Trent Alexander-Arnold a torrid time, has also hit the net on four occasions this term.

“We made a bet with Solly, he has to score more than 10 goals,” said De Zerbi.

“He has this target because he can score more goals, like Mitoma.

“Solly March always works like he is playing in the final of the Champions League and when he makes a mistake I can say nothing. Like Mitoma, he works always for the team.”