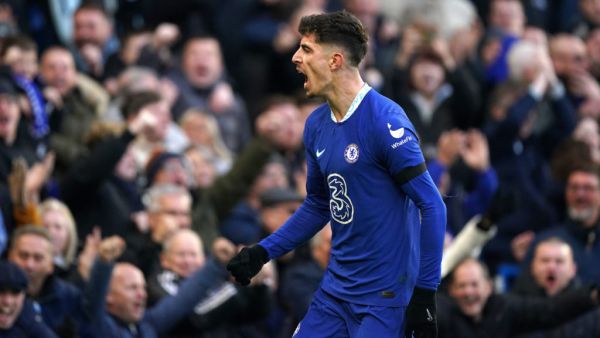 The pressure eased on Chelsea manager Graham Potter as his side claimed just a second Premier League victory since October with a 1-0 win against Crystal Palace at Stamford Bridge.

Kai Havertz headed the winning goal just after the hour as the hosts celebrated the £62million signing of Ukraine winger Mykhailo Mudryk, who was paraded on the pitch at half-time, with a vital win to cut the gap on the top four to eight points.

It was a poignant day in West London as Chelsea marked the death of former player Gianluca Vialli before the match, with a host of the Italian’s former team-mates returning to pay their respects.

It contributed to a feeling of togetherness between players and supporters at Stamford Bridge, as the team put a torrid last seven days – which culminated in a red card for new signing Joao Felix in defeat at Fulham last Thursday – behind them.

Palace had the first real chance of the game after 20 minutes when Michael Olise allowed the ball to drop over his shoulder and drilled an effort towards Kepa Arrizabalaga’s top corner from 25 yards, which the Chelsea goalkeeper did brilliantly to finger-tip behind at full stretch.

But it was the hosts who had the best chance of the first half in the 33rd minute when Havertz rose unmarked to meet Hakim Ziyech’s whipped cross, with the forward only able to land his header onto the roof of Vicente Guaita’s goal from six yards.

Just before half-time, Conor Gallagher broke away down Palace’s right and fired a low ball across goal which Lewis Hall was unable to angle home with a first-time effort at the back post, before Ziyech saw a fierce drive from the edge of the area tipped over by Guaita as Chelsea finished the half strongly.

The hosts’ confidence grew into the second half and Havertz again went close when he latched onto Gallagher’s through ball down the left, but his low drive found the gloves of the Palace goalkeeper who held on well.

Pierre-Emerick Aubameyang was sent on by Potter on the hour having recovered from a back injury – the first of the manager’s long list of absentees to make a return – and within a minute Chelsea had the lead.

Ziyech collected the ball near the left touchline and as his whipped cross evaded Palace’s defence, there was Havertz climbing highest to plant his header past Guaita from six yards.

Havertz should have put the game beyond Palace when he darted behind the defence to meet Mason Mount’s driven cross, but this time his direction was lacking as a wonderful chance to seal the win went begging.

Join us in welcoming our new number 15, Mykhailo Mudryk! 👏 pic.twitter.com/QiNPzWPNFY

And Chelsea were almost made to pay minutes later when Cheick Doucoure unleashed a fierce drive from 30 yards which required a fine stop from Arrizabalaga to preserve his side’s lead.

But the hosts held on to bring respite to Potter and, with Mudryk now on the books, breathe life back into their season.