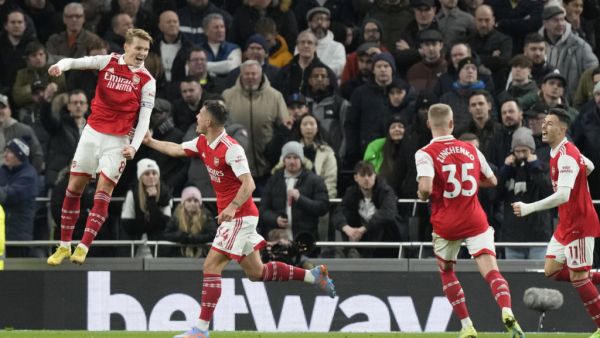 Arsenal have claimed a 2-0 victory over Tottenham in the north London derby to move eight points clear at the top of the Premier League.

An own goal from Spurs’ keeper Hugo Lloris and a second from skipper Martin Odegaard was enough for the Gunners to claim the win.

There was a flashpoint at the end as Richarlison clashed with Aaron Ramsdale and a fan attempted to get to the Arsenal goalkeeper.

Chelsea have picked up a much-needed 1-0 win against Crystal Palace to ease some of the pressure on boss Graham Potter.

A second-half header from Kai Havertz sealed their first Premier League victory of 2023.

Before the game Chelsea confirmed they had completed the signing of Mykhailo Mudryk from Shakhtar Donetsk.

Alexander Isak scored a 90th minute winner to beat Fulham 1-nil and move Newcastle back up to third.

The visitors had a controversial penalty ruled out after Aleksander Mitrovic kicked the ball onto his standing foot.

Boss Marco Silva believes they should have been awarded a spot kick moments before then – and their opponents should’ve been down to 10 men.

Rangers have beaten Aberdeen 2-1 after extra-time in the Scottish League Cup semi-final at Hampden Park.

They will face Celtic in the decider.

Fossa of Kerry have beaten Tyrone’s Stewartstown Harps by 0-19 to 1-13 in the AIB All-Ireland Club Junior Football Championship final.

There were 6 red cards in the game at Croke Park.

Rathmore of Kerry have beaten Tyrone’s Galbally Pearses by 1-11 to 0-11 in the AIB All-Ireland club intermediate football final.

In Pool A of the Heineken Champions Cup, Edinburgh have beaten Castres by 34-21.

Zimbabwe beat Ireland by four wickets in the deciding game of their T20 internationals in Harare.

Judd Trump leads Mark Williams by 5 frames to 3 in the final of The Masters.

It is a best of 19 contest at Alexandra Palace.