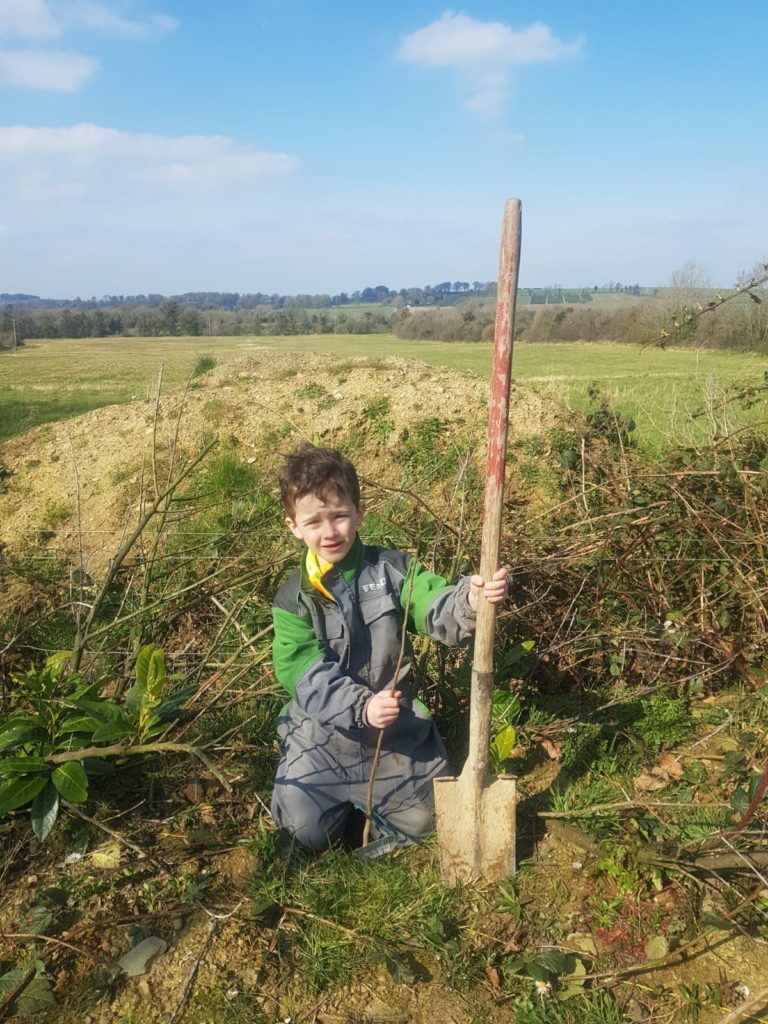 Planting trees in the locality as part of a campaign by Grangecon Goes Greener, Aaron Doyle

COMMUNITIES in West Wicklow have found an extra spring in their step in 2023 as a local reforestation project continues to take root.

Over the last four years, the project has seen over 12,000 native Irish saplings planted by the people of Grangecon. The project’s roots have slowly been creeping outward, with planting also taking place with Jonathan Tallon and the village of Kilmead, the Dunlavin Dream Team, Camphill Community Trust, Kill Tidy Towns, the Irish Bee Sanctuary, Baltinglass Golf Club, Tuckmill Pure Mile Group, and Cross and Passion School, Kilcullen to name but a few.

Lena Byrne from Tuckmill and a member of the Tuckmill Pure Mile Group will plant 1,000 saplings this month with the group.

Rather than planting on roadsides, where permission may be needed from the council, group members have adopted saplings to plant in their own and neighbours’ gardens.

“I’m amazed with the uptake from local community,” said Lena. “Initially expecting to plant a couple of hundred, numbers soon reached 1,000 and still haven’t stopped. Many of the recipients live on the same road. I will set up a table at the gate and people can collect their trees.”

The Tuckmill Pure Mile Group was set up by Lena’s son Charlie as part of a transition year school project in 2020 and has gone from strength to strength since.

Not everyone has the space to plant a forest, but many have space to plant five or ten saplings. Some project participants in West Wicklow have given over half of their site to planting trees.

Wanda Bourne from Grangecon has expressed delight with her own personal woods. Previously, the large garden just grew grass, a green desert of sorts. As well as planting native Irish saplings, Wanda has interplanted with useful food-producing trees and bushes such as hazel and gooseberry. Last summer, she had a ready supply of raspberries, strawberries and blackcurrants. Already the longer grass is providing a habitat for the Wicklow Pygmy shrew, which is native to the area.

Looking at the National Pollinator Plan from the National Biodiversity Data Centre and how to manage your garden for biodiversity, Wanda has also introduced a ‘no mow’ mantra.

“I keep the area close to the house short so we can sit out during fine weather, but for the rest, I take off the heavier growth once or twice a year. Now I wonder why I spent so much time cutting grass in the first place,” she says.

“I didn’t even have to plant wild meadow seeds, as there was already a seed bank in the soil. Once I stopped cutting, they got a chance to grow. Now I nearly have colour all year around.”

The Baltinglass Golf Club committee with head greenkeeper Eamon Doherty have overseen the planting of more than 3,000 saplings around the course.

The saplings are being used not just in areas to infill, but also to create a new under-canopy and create habitats. Tree planting is just one of the initiatives being undertaken at the club to help increase biodiversity. Jennifer Page from Go Greener with Grangecon says she has been amazed with the reaction from the local community to planting trees.

“We started with 38 saplings in the first planting season, but as awareness of our project has grown, we have facilitated the planting of 11,000 saplings in West Wicklow with help from amazing organisations like Easy Treesie and Reforest Nation,” she said

On top of this, Grange Con Tidy Towns has planted even more native fruit trees in the village, with a community orchard behind the village hall and a satellite orchard in the local national school.

“Grangecon village has gone from strength to strength over the last few years, coming top of its group in the 2022 national Tidy Towns competition. It is only through the efforts of group members such as Julia Glass that innovative ideas such as tree planting, a herbicide-free village and village orchard have captured the imaginations of locals with the community … “planting in the community for the community”, said Julia.

The Bee Sanctuary of Ireland in Coolafancy, Tinahely has over the last few years planted more than 1,000 saplings, not just to create local habitats, but to also contribute to national reforestation efforts.

Easytreesie.com has also supported and facilitated several artists in their work over the last few planting seasons.

The Orchard Project and Hiding a Forest in Plain Sight by Wicklow artist Steven Doody has seen orchard and tree planting workshops taking place with schools and communities throughout counties Carlow, Wicklow, Kildare, Dublin and Offaly.