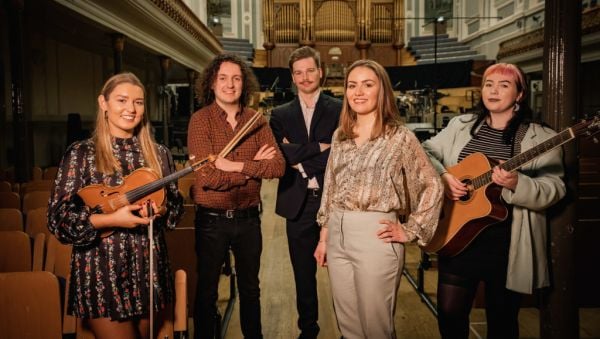 Six young musicians from Northern Ireland are to be given the opportunity to take part in a radio broadcast with the Ulster Orchestra after winning a major arts award.

The recipients of the Young Musicians’ Platform Award will be mentored for the broadcast by BBC presenters John Toal, Lynette Fay, Stephen McCauley and Linley Hamilton.

The biennial awards, which are run by the Arts Council in collaboration with BBC Northern Ireland and supported by the National Lottery, aim to showcase and support the development of gifted young musicians from the region by providing individual funding awards of up to £5,000.

This funding enables the recipients to spend time learning from a master musician, mentor, teacher or composer either in Northern Ireland or abroad.

As well as this training opportunity, the awardees will receive two professional BBC radio broadcast engagements, including one with the Ulster Orchestra on March 16th at the Ulster Hall in Belfast.

The performance will be broadcast on Radio Ulster and Radio Foyle.

Ciaran Scullion, head of music and opera at the Arts Council of Northern Ireland, said: “Congratulations to all six musicians on receiving these awards which offer a unique opportunity to develop musical skills, learn from the best and perform live with the Ulster Orchestra.

“All of the previous recipients of this award have gone on to have incredibly successful careers in music and I’ve every confidence that the new recipients will benefit greatly from this experience.”

Paul McClean, executive editor on music, arts and events at BBC Northern Ireland, said: “We are delighted to be involved in finding new classical, traditional, jazz and singer/songwriting artists and to be able to have our listeners engage in their journey as they grow and develop with some help from John, Lynette, Linley and Stephen, each of whom has a deep love of music.”

Andrew McCoubrey is a jazz drummer and improviser based in Londonderry who wants to establish himself as a bandleader.

Traditional fiddle player Meabh Smyth from Armagh has performed and taught at festivals all over Ireland and Europe, including Celtic Connections, Baltimore Fiddle Fair and Belfast TradFest.

Eve Belle Murtagh is a singer-songwriter originally from Donegal, now based in Belfast. Her debut album In Between Moments was released in 2022.

Soprano Rebecca Murphy has performed widely across Northern Ireland and beyond and is currently studying in London.

Andrew Masterson is a lyric tenor from Omagh, Co Tyrone, and alumni of the Royal Northern College of Music. He has worked with numerous opera companies in the UK and Ireland.