Kilquan Players return to the stage with side-splitting comedy 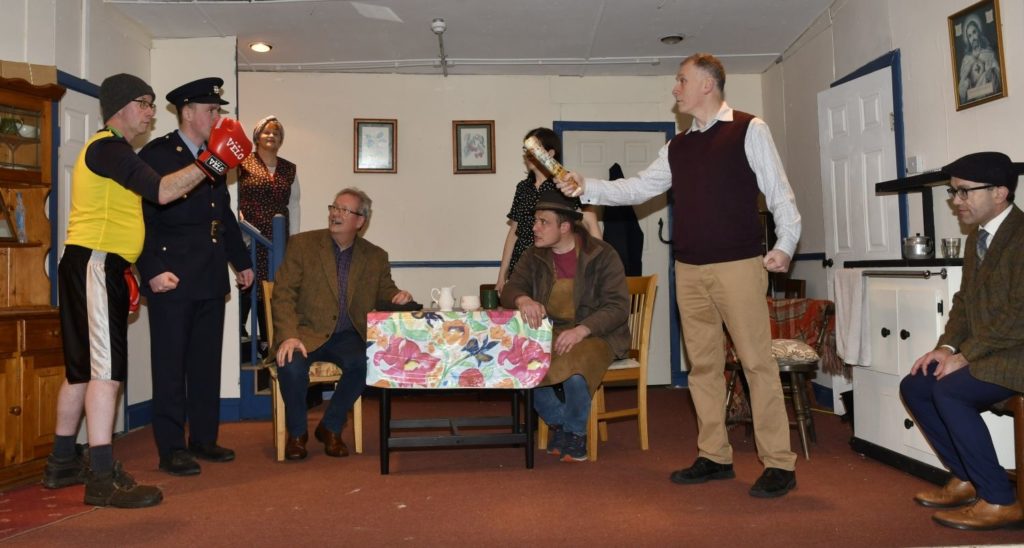 KILQUAN Players are back and rain’ to go, with five nights of entertainment planned for their latest play Anyone could rob a bank by Thomas Coffey.

The play will be performed in Coon Hall at 8pm from Friday to Sunday 3-5 February, and again on Friday 10 February and Saturday 11 February. Doors open at 7.30pm each night.

It’s been three years since the Kilquan Players have performed due to the pandemic, so the cast and crew are delighted to back on stage and are eagerly looking forward to five successful nights.

Anyone could rob a bank is directed by Benny Mills, with a cast of eight performing. The play is set in the kitchen of Badger Grey’s house at the back of his shop.

Having read about an unsuccessful bank robbery in Dublin, Badger and his friends Jerreen and Windy plan a ‘successful’ robbery of their own, just to show how it could be done, while having no intention of doing it themselves.

To the town’s amazement, a bank robbery takes place two days later, carried out in accordance with their very plan! When they wake up to the news, they begin to suspect each other. The mayhem, accusations and shenanigans that follow the robbery make for some side-splitting drama.

You’ll meet the gruff-spoken Badger, played by Martin Murphy, and his hare-brained wife Sarah, played by Ann Tunstead. There’s Noreen, played by Jamie Houlihan, their pretty, flirtatious daughter, who has a crush on the local Sergeant Brian Fitzpatrick while, at the same time, being attracted to Tony Tom Brennan, a businessman who is in town for a few days.

Then there’s Badger’s brother Jerreen, played by Tom Murphy, and his nephew Mickey, played by Pat Healy, a wannabe boxer who is an apprentice to Jerreen. Throw Badger’s next-door neighbour Windy (Benny Mills) into the mix and you have a right good crew for all the wrong reasons.

This laugh-filled comedy offers a much-needed return to live theatre in the area, a wonderful night’s entertainment locally.

A nightly raffle means that great prizes will be up for grabs each night, with the proceeds going to local charities and organisations in the Carlow, Kilkenny and Laois areas.

Admission is €10 on the door, while refreshments (tea and scones) will be served free each night.