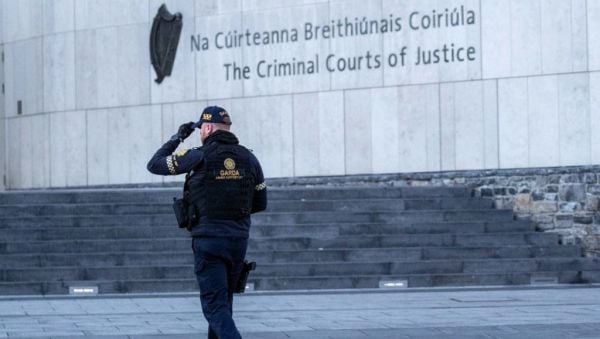 A senior garda has given evidence to the Regency Hotel murder trial of four shootings that have taken place during the Hutch-Kinahan feud, including the still “open investigation” into an attack on Patrick Hutch Junior, who star witness Jonathan Dowdall said he was told was shot by Daniel Kinahan.

Detective Superintendent David Gallagher from the Garda National Drugs and Organised Crime Bureau (GNDOCB) told the Special Criminal Court on Monday that the murder of Eddie ‘Neddie’ Hutch in 2016 is also still an open investigation but that he “would rather not say” if the suspects were within or outside the jurisdiction.

The three-judge court was further told on Monday that the prosecution case against murder accused Gerard Hutch and his two co-accused should finish on Thursday.

Last November, Det Supt Gallagher told the trial that the “Hutch Criminal Organisation” emanated from “intergenerational familial bonds and close family associations” in Dublin city centre and operated on a patriarchal system of loyalty based on monetary gains.

The Englishman, who was training boxers at the MGM gym in Marbella at the time, was the subject of five gunshots being fired and was hit twice. “The gunman who fired the shots approached Mr Moore [after he was injured and on the ground] and was about to inflict further shots when there appeared to be a realisation that he was not the intended target,” said the officer.

Investigators were satisfied that Mr Moore was an innocent man shot in a case of mistaken identity.

At the time, Det Supt Gallagher said Mr Moore was training boxers within the boxing stable of MGM and that the gym was owned at the time by ex-professional boxer Matthew Macklin and Daniel Kinahan.

Mr Moore was staying in a villa with Daniel Kinahan before the shooting, he said.

Det Supt Gallagher also gave evidence on Monday about Patrick Hutch Junior, the son of Patsy Hutch Senior and nephew of Gerard Hutch, being shot at an undisclosed location in Dublin on August 15th, 2014.

Patrick presented at the Mater Hospital with a single gunshot wound to the leg that was described as serious but not life-threatening. He did not cooperate with the garda investigation into the shooting and the matter is still an open investigation, said Det Supt Gallagher.

Jonathan Dowdall told the court in his direct evidence last December that in 2015 he was told that Patrick Hutch Junior was accused of trying to kill Daniel Kinahan in Spain.

Dowdall said he was told Patrick did not do it, that he wasn’t involved, but the Kinahans demanded €200,000 from Patsy Hutch’s family. Dowdall later found out that the €200,000 was compensation for a boxer who had been shot during the attempt on Kinahan’s life.

Dowdall told the court that at some point Gary Hutch was “more or less held hostage” and Patrick had to “hand himself up for a punishment shooting”.

Dowdall said he believed the shooting happened in Drumcondra. He added: “Patrick went with a family member and was shot and was brought to the Mater hospital. I was told it was Daniel Kinahan himself who shot him.”

The €200,000 was also paid, Dowdall said, but Patsy Hutch told Dowdall that the Kinahans made more demands for money before Gary Hutch was shot dead in September 2015. He said he was told that Gary was killed by the Kinahans.

Under cross-examination on December 13th, Mr Hutch’s defence counsel Brendan Grehan SC put it to Jonathan Dowdall that the “real reason” the feud started was that Daniel Kinahan was supposed to give a punishment shooting to Patrick Hutch for his alleged role in trying to shoot Kinahan but instead of inflicting a flesh wound, he shot him in the bone.

Dowdall disagreed, saying that he found out while in Wheatfield Prison that Gary and Patrick had tried to take €4.5 million from Daniel Kinahan’s house.

“Patrick hid in the bush to shoot Daniel and he shot that boxer by mistake,” he said, referring to boxer Jamie Moore who was injured in the alleged attack on Daniel Kinahan. The ex-politician added that Patrick was shot by Kinahan “because he was blamed for what happened to that boxer”.

Det Supt Gallagher also gave evidence on Monday about the shooting of Gary Hutch, the eldest son of Patsy Hutch and nephew of Gerard Hutch.

The witness confirmed that Gary, who was originally from Champions Avenue in Dublin 1 but who had been living in Spain for eight years prior to his murder, was fatally shot at Angel De Miraflores apartments complex in Mijas in Malaga on September 24th, 2015.

Irish national James Quinn, the court heard, was convicted after a trial in Malaga of being the getaway driver and was sentenced to 20 years for the murder and an additional two years for a weapons offence.

Det Supt Gallagher also testified about the shooting of Edward ‘Neddie’ Hutch, who was shot dead at his north-inner city home at Poplar Row, Fairview in Dublin 3 on February 8th, 2016. This was believed to be a revenge attack for the Regency Hotel shooting three days earlier.

The witness said that Edward Hutch, a taxi driver and brother of Gerard Hutch and Patsy Hutch, was returning to his home on the night and as he exited his taxi and entered his house a number of males alighted from a BMW and fired a number of shots, before pursuing him into his house and shooting him.

“Concerning the shooting of Patrick Hutch Junior, [the investigation] it never progressed as he made no complaint, he presented with a gunshot wound and various hearsay sources as to how it came about?” asked Brendan Grehan SC, for Mr Hutch.

The witness said Mountjoy Garda Station conducted the investigation, that a shell casing was recovered from a vehicle and that gardaí were satisfied that the shooting happened.

The witness further agreed with the barrister that no complaint was made about the shooting or information provided by Patrick Hutch Jnr as to how it came about.

Asked if his information in relation to the murder of Edward Hutch was “second hand”, Det Supt Gallagher disagreed saying he would have joined the GNDOCB in April 2016 so was fully aware of the facts of the case but that he had linked in with the investigation team in Store Street Garda Station.

He agreed with the lawyer that no one had been brought to justice for the murder of Edward Hutch and that the file remains open.

Earlier, the Special Criminal Court ruled that CCTV footage concerning the movement of a silver Toyota Avensis taxi associated with Paul Murphy can be admitted as evidence against him.

Mr Murphy is accused of helping a criminal gang murder Mr Byrne at the Regency Hotel in Dublin almost seven years ago.