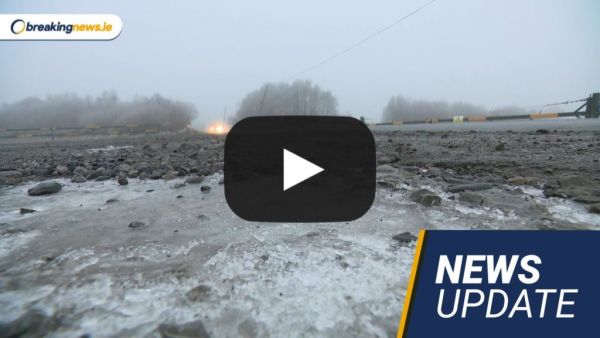 A low temperature and ice warning will come into place on Monday afternoon, with Met Éireann warning of hazardous travelling conditions.

Wintry showers are expected in the northwest and southwest with accumulations of snow possible, especially in mountainous areas.

The warning comes into effect at 4pm on Monday and will last until 12pm on Tuesday.

A man who tried to hire a hitman to kill a couple who were exchanging intimate online messages with his now ex-wife has been jailed for four-and-a-half years by the Central Criminal Court.

Bryan Kennedy (35) will not begin his sentence immediately because Ms Justice Caroline Biggs said she wants to allow time for the child and family agency Tusla to put in place supports for his children.

She adjourned the matter until April 17th next when Kennedy is expected to be taken into custody once the court has been satisfied that his children will not be disadvantaged by his prison sentence.

The Irish arm of IT giant Meta has gone to court over a decision by the Data Protection Commission to fine it €405 million.

It has claimed before the High Court that the decision to impose a total fine of €405 million for breaching the privacy rights of teenagers is unconstitutional.

The fine was issued last September by the DPC following an investigation it conducted into GDPR breaches.

A Credit Union for Citybus employees was forced to close after the chair of its board of directors stole over €100,000 through a series of frauds and thefts, a court has heard.

Retired bus driver David Stamper (68) joined Citybus Employees Credit Union as a volunteer in 1994 before joining the board of directors in 1997. He became chair of the board in 2013. He began misappropriating funds in the Credit Union in 2009.

Stamper, of The Crescent, Abbeyfarm, Celbridge, Co Kildare, was brought forward to Dublin Circuit Criminal Court following 82 signed pleas of guilty from the District Court. He was jailed for a year on Monday.

A passenger on the plane which crashed in Nepal on Sunday and who was described as Irish by Nepalese authorities is a UK national, it has been confirmed.

The man has been named as Ruan Calum Crighton.

His was among the names of passengers published by the Civil Aviation Authority of Nepal, where his nationality was listed as Irish.