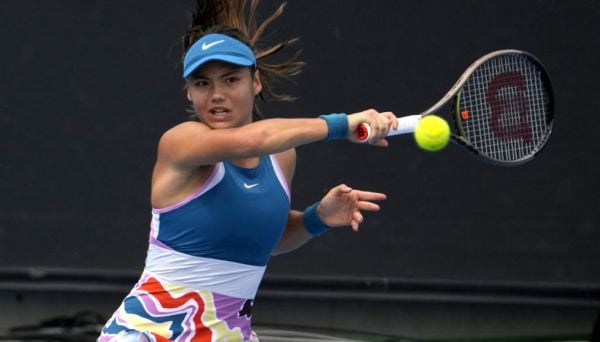 Emma Raducanu can swing freely and put herself “back on the map” by defeating Coco Gauff in the second round of the Australian Open, according to John McEnroe.

The two biggest young stars in the women’s game have been given the primetime slot of the night session on Rod Laver Arena for their first career meeting.

With rivalries distinctly lacking, the sport will surely hope that there are many more matches to come between the pair, who are friendly off court having first met as juniors.

Gauff v Raducanu advance to the second round of the women’s singles. Who’s your pick? 🎾#AusOpen • #AO2023 pic.twitter.com/3J83EIYQdw

Raducanu was still playing at that level when Gauff launched herself onto the global stage by reaching the fourth round of Wimbledon as a 15-year-old in 2019.

She has banked a lot of experience since and is now an established top-10 player while Raducanu shot past Gauff by winning the US Open but has found the lack of a stable foundation a real challenge.

McEnroe, working as a pundit for Eurosport, said: “It will probably be the first time in a couple of years where Emma Raducanu won’t be feeling the type of pressure she’s been feeling since she won the US Open.

“So that’s probably a good thing, to allow her to be more free and do her thing, because to me she’s the type of player, the type of person and the type of talent that we could use in the top 10.

“I think Coco is in the better position right now to make a deep run and I think it’s going to be soon that she’s going to win a major event, in the next year or two at the most. To me she goes in as a heavy favourite.

“She seems to be playing better and better and serving more consistently than she has done. I would say that it’s a match she should win, but a match that could put Raducanu back on the map again, which would be good for her.”

Raducanu’s first-round victory over German Tamara Korpatsch was just her fourth at a grand slam since her phenomenal run to the title in New York.

Having gone into the tournament with concerns over an ankle injury suffered in her first event of the season in Auckland, Raducanu produced a strong performance after overcoming initial hesitancy.

Her forehand, which had become passive at times last season, was a real weapon again, with the 20-year-old looking to step into the court at every opportunity.

Raducanu, who has spoken glowingly about her fledgling partnership with new German coach Sebastian Sachs, said: “My off-season, the tennis part was like six days (because of a wrist injury).

“I did not really train. But I did a lot in the gym and I think that my forehand is a real weapon of mine. It’s going to take some fine tuning but, going forward, I really see myself loving that side and I really do.

“I think just at the moment I’m swinging more freely in general it probably shows in my forehand maybe.”

If there was a signature shot of Raducanu’s New York success it was her searing return and Gauff is expecting her serve to take some punishment as the British player chases the first top-10 victory of her career.

“I’m just going to have to be ready and accept some return winners that might come my way,” said the American, who is still only 18. “I think it will be a good match-up for both of us. I’m excited.”

Gauff had an excellent 2022, reaching her first grand slam final at the French Open, moving into the top 10 and becoming world number one in doubles.

Vulnerability remained in her serve and forehand but the teenager was delighted with the work she did in pre-season – which included boxing – and has looked very strong in her first matches of the year, winning the title in Auckland and defeating Katerina Siniakova in round one.

:: Watch every match from the Australian Open live and exclusive on discovery+ and Eurosport.