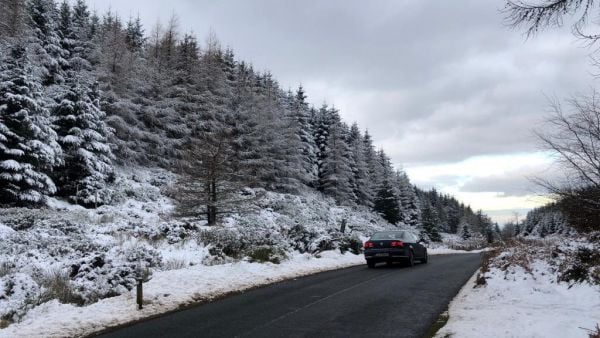 Met Éireann meteorologist Gerry Murphy has warned motorists to take care on the roads today as temperatures are down as low as -7 degrees in parts of the midlands.

Mr Murphy told RTÉ radio’s Morning Ireland that there is a status yellow low temperature ice warning in place for the entire country until midday with all weather stations giving temperatures below freezing.

There had also been snow in parts of Kerry, west Cork and in the north-west.

Temperatures today are expected to stay between 0 degrees and 4 degrees as frost will linger.

Overall, it will be a very cold day, which means that any of the showers that occur, which will mainly initially be in the west and north, they’ll all really as rain, but sleet and snow, possibly, especially on high ground.

Eastern and southeastern counties will stay largely dry, but roads everywhere will be dangerous as the frost will be very slow to clear and there are places where it will not clear at all, he added.

Temperatures will drop again once it gets dark, which means that some of those showers may fall increasingly as sleet or snow in places, especially over the northern half of the country. Tonight will not be quite as cold as last night, but it will still be cold enough for a widespread frost.

Mr Murphy said that the cold spell will last until late on Thursday and into Friday, with another very cold day in store for tomorrow with temperatures between two degrees and five degrees.

By Friday temperatures should not be as low as there will be milder air along with rain, he said.

“The current cold snap is because of the return of colder Arctic air, while it is not as cold as the wintery conditions before Christmas, there is more moisture at present which will mean more sleet and snow showers especially in the west and north,” he said.