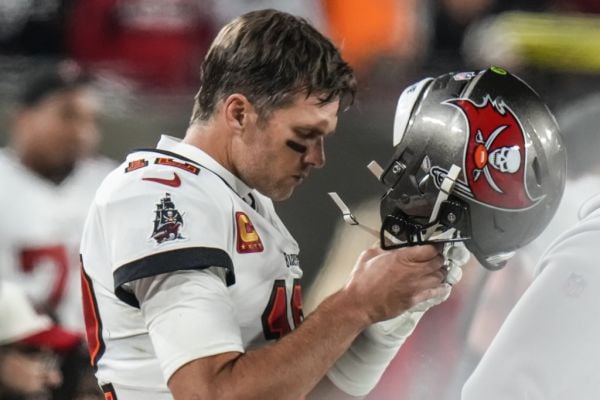 Tom Brady offered few clues on his next move after the Tampa Bay Buccaneers were beaten 31-14 by the Dallas Cowboys to end their season.

The seven-time Super Bowl champion (45) announced his retirement in February last year only to reverse that decision 40 days later, and must now consider his future again as he is set to become a free agent.

That was the obvious question in the wake of a disappointing loss for Tampa Bay, whose season-long struggles offensively were on show once again.

“I’m going to go home, get a good night’s sleep, as good as I can tonight,” Brady said. “There has been a lot of focus on this game, so yeah. It’ll just be one day at a time, truly.”

But Brady did appear to be preparing for the possibility this was his last outing – whether with Tampa Bay or at all – with some of his actions after the game.

First there was an emotional embrace with his parents and sister near the tunnel. Then there was a message of thanks at the end of his press conference.

“It just feels like the end of the season,” he said “I love this organisation. It’s a great place to be. Thank you, everybody, for welcoming me.”

If this was the end, it was not the way a player widely considered to be the best quarterback to ever grace the NFL would have wanted to go.

Brady completed 35 of 66 passes for 351 yards and two touchdowns and an interception, but threw a red zone interception and misfired too often, looking rushed in his play as the Cowboys defence applied pressure.

For only the second time in 48 play-off appearances, he was held scoreless in the first half. Last season, the Bucs had the second-highest scoring offence in the league, but this year they have slumped to 25th.

“They played good defensively and put a lot of pressure on us,” Brady said. “We just couldn’t make enough plays. So it was kind of typical of the way we played all year, just inefficient in the passing game and not very good in the running game. So it’s hard to beat good teams like that.”

Brady’s struggles were in stark contrast to Cowboys quarterback Dak Prescott, who accounted for five touchdowns in all – four through the air and one on the ground as he threw for 305 yards and rushed for another 24.

Prescott came into the post-season in poor form, but quickly snapped out of it.

“I got away from the way I play this game,” Prescott said. “Got greedy. Tried to just force some throws. Tried to take the big ones. And that’s not who I’ve been throughout my career, just taking what they give me, waiting on the big shot.

“I think it was uncharacteristic. It was a way for me to just dial back in. But I wiped that clean, and I knew what this game meant. I knew how important it was for our side.”

The Cowboys will now face the San Francisco 49ers, the team that eliminated them in 2021.