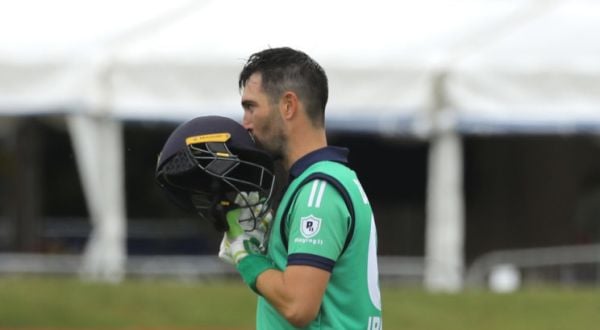 Irish captain Andrew Balbirnie and Harry Tector had earlier scored centuries as the tourists made 288 for four, but the tension cranked up in the second innings as rain intervened and eventually left Zimbabwe chasing 214 in 37 overs.

The hosts still needed 13 off the final over, with Graham Hume the man to deliver what turned out to be a six-ball rollercoaster.

After a single off the first ball, Curtis Campher struck gold by running out Zimbabwe’s top-scorer and likeliest finisher, Ryan Burl, for 59. That swung the pendulum in Ireland’s favour, only for Brad Evans to hit his first delivery for six.

The action kept coming thick and fast as Hume removed Evans lbw at the next visit and the game went all the way as Madande faced up needing four off one ball. Hume missed his length and Madande found the ropes at wide long-on to see his side home with 12 not out in just his second one-day appearance.

Balbirnie missed the dramatic conclusion, sitting out fielding duties after taking a nasty blow to the helmet from Evans. He was forced to retire hurt, bringing a premature end to a fine knock of 121 in 137 balls, including three sixes and 13 fours.

He and Tector had shared a stand of 212 for the third wicket, with the latter going on to an unbeaten 101.

Zimbabwe stumbled to 99 for four, the returning Josh Little dismissing former England batter Gary Ballance for 23 on his ODI debut for his birth country. But Burl and Sikandar Raza compiled busily as the Duckworth-Lewis-Stern par loomed large in wet conditions. The teams got back on the field after a break, setting up Madande for a nine-ball cameo he will not forget quickly.