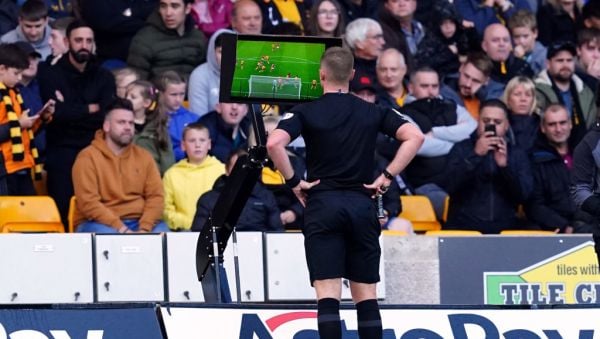 Referees at next month’s Club World Cup will communicate decisions taken after VAR reviews to the crowd as part of a new trial.

One of the great frustrations around VAR, particularly among match-going fans, has been the lack of communication around how a decision has been reached.

The game’s lawmaking body the International Football Association Board approved a trial at its annual business meeting on Wednesday that seeks to tackle the issue.

If the initial trial is a success, it could be rolled out to other FIFA competitions later in the year including the Women’s World Cup.

IFAB board member Mark Bullingham, the chief executive of the Football Association, said: “We think it’s important in terms of transparency, predominantly to the crowd in the stadium, who at the moment don’t get enough information as to what’s happening with a decision.”

Bullingham said conversations between the on-field referees and the VAR would remain private, but that the conclusion of that debate would be relayed to the crowds at the event in Morocco.

A decision has yet to be made over which language the updates at the Club World Cup will be given in, and over how they can be translated in real time into different languages.

The IFAB ruled out a trial of a countdown clock to maximise playing time and reduce time-wasting in matches, but said the approach taken by referees at the World Cup in Qatar last year to accurately calculate the time taken up by treatment of injuries, substitutions and goal celebrations would be rolled out as guidance to competitions around the world.

Bullingham was asked whether he felt in the long term this would lead to matches consistently lasting well over 100 minutes but said: “If players know that the time that they’re down will be added there’s less incentive for them to go down.”

Irish Football Association chief executive Patrick Nelson, who is also on the IFAB, said: “What was successful in the World Cup was a stricter calculation of the time that had gone missing during the game. So no need to change the laws of the game, just to remind people where the edges are.”

The IFAB also discussed the use of semi-automated offside technology at the tournament in Qatar, which was deemed to have been successful.

However, Bullingham said the next step now was for decisions to be made more quickly, for the illustrations to be generated more quickly and to increase the degree of automation in the years to come.