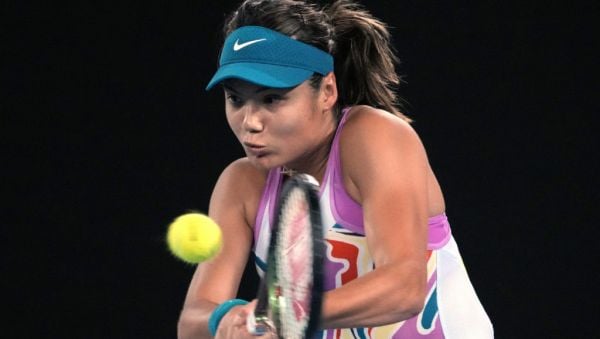 Emma Raducanu pushed Coco Gauff but fell short of an upset in the second round of the Australian Open.

Raducanu was trying to beat a top-10 player for the first time, and this was a contest of fierce hitting that produced sporadic moments of brilliance from both women as well as a lot of errors.

The British number one, ranked 70 places below Gauff, grew into the match and was the better player late in the second set but was unable to take two set points and fell to a 6-3 7-6 (4) defeat.

Although she is more than a year younger than her rival, Gauff has a lot more experience after a steadier rise up the ranks and is one of the favourites to win the tournament.

Gauff’s thumping serve was one big difference between them, while physically she is more developed than Raducanu, who remains very much a work in progress.

The former US Open champion is yet to make it past the second round of a grand slam since her New York heroics but there should not be too much despondency at another early exit.

The physical work that she put in during the off-season helped her trade blow for blow with one of the most powerful players in the game and she reminded critics and fans alike that she is a player of rare talents.

Raducanu was again wearing tape on her left ankle as she walked out for her debut on Laver, which was covered on an inclement day in Melbourne.

It was a first meeting between the two most high-profile young stars in the women’s game and an intriguing barometer of where Raducanu’s game is at as she looks to begin climbing the rankings again.

Raducanu set out her stall on Gauff’s serve early, stepping in and arrowing returns at the American’s feet, and it was clear she was not going to allow her opponent to own the baseline battles.

But Raducanu’s own serve was not proving reliable while her aggressive approach meant a slew of errors.

Gauff got the better of three breaks of serve in a row to lead 4-2 and then saved three break points serving for the set to keep her nose in front.

Raducanu’s level dipped at the start of the second set, with two double faults handing Gauff a break of serve to lead 2-1, but she picked it up again and it was the American’s turn to falter as Raducanu broke back for 4-4.

Suddenly Gauff looked hesitant and Raducanu created two chances to force a decider in the next game only to overcook a forehand on the first and dump a drop shot into the net on the second.

Gauff held on to force a tie-break and used her remarkable powers of defence to frustrate her opponent before clinching her third match point.