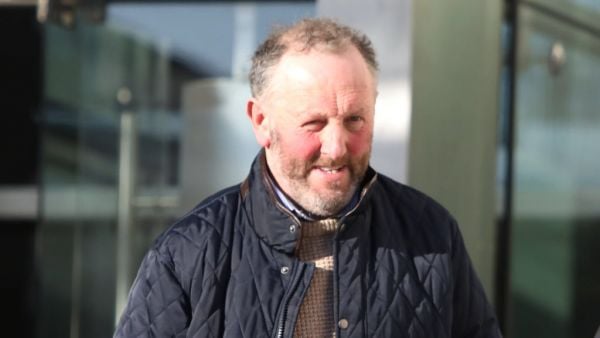 A farmer has gone on trial at the Central Criminal Court accused of murdering his 76-year-old aunt by driving over her in a tractor following a long-running dispute over land.

Opening the trial for the prosecution this afternoon, Dean Kelly SC told the jury that the prosecution case is that Christine ‘Chrissie’ Treacy was murdered in a crime of the “most terrible and dark sort” by her nephew Michael Scott.

Mr Scott from (58) of Gortanumera, Portumna, Co Galway has pleaded not guilty to murder.

Mr Kelly told the jury that Chrissie Treacy died some time after 3pm on April 27th, 2018 as a result of being driven over by a JCB tractor in a yard directly outside her home at Derryhiny, in Portumna.

He said: “The prosecution case is that Michael Scott was driving the tractor and far from being a tragic accident, he deliberately drove over her intending to cause her serious harm in the context of a long-running dispute with her.”

He said the dispute is one that is familiar to many people in Ireland, “it was a dispute over land”.

The land in question, he said, is in south-east Galway but is more a part of the golden vale in terms of the quality of the farmland.

Ms Treacy lived at Derryhiney all her life and with her brothers Willie and Michael, she had farmed the 120 acres for many years.

They were well-liked in their community and considered to be hard-working, progressive farmers who embraced new technologies and did a “fine job” of farming their land.

Michael died in 2003 and Willie died in 2009, leaving the farm divided between Chrissie Tracey and her nephew, the accused.

Mr Scott is the son of Ms Treacy’s now-deceased sister Maureen. Mr Scott continued to farm the land and, Mr Kelly said, there is no doubt that he is an “accomplished, skilled and hardworking farmer”.

In the years leading up to her death Ms Treacy’s health worsened, so she was no longer involved in the running of the farm.

Mr Kelly said that the jury will hear from a carer and a local postman who saw Ms Treacy on the afternoon before she died.

The postman, counsel said, will say that he left her home that afternoon and passed Mr Scott heading towards Derryhiney along a small country road at about 3.05pm.

A short time after that, Mr Kelly said, a phone call was placed from Derryhiney to the effect that Chrissie Treacy had been hit by the tractor.

He said it is the prosecution case that by April 2018 the relationship between the deceased and the accused had almost completely broken down and that Mr Scott had a sense that he had been “wronged and disentitled”.

Mr Kelly said it was “with a powerful sense of anger and resentment in response to the changing position on the ownership of the land they shared that he drove to Derryhiney that afternoon” and in the ten to 12 minutes available to him, he “callously and wilfully drove over his aunt”.

If what happened was a tragic accident, Mr Kelly said the accused is a victim who has lost his last surviving aunt.

He added: “If not a tragic accident, it is a crime of the most terrible and dark sort, and it is the prosecution case that it is the latter.”

Mr Kelly asked the jury to put emotion and sympathy out of their minds and try the case on the evidence.

A 15-person jury consisting of seven men and eight women was sworn to hear the trial, which could last up to ten weeks.

Ms Justice Caroline Biggs explained to the jury that the extra jurors are required due to the risk that some may become ill during the season of flus, viruses and Covid-19.

She told them that when it comes to their deliberations, 12 of them will be randomly selected.

The trial continues on Thursday.