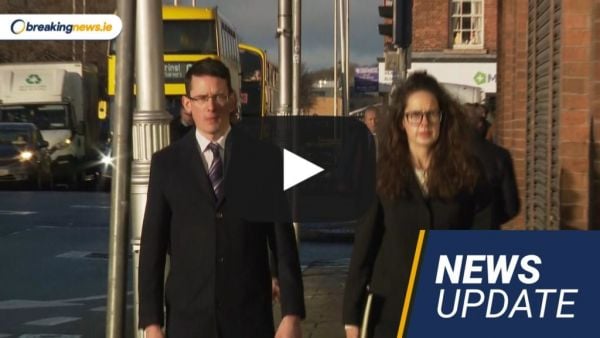 A High Court judge has refused to grant Enoch Burke an injunction halting disciplinary proceedings against him after the teacher said he will not comply with a previous court order to stay away from a Co Westmeath school.

This means the disciplinary hearing is likely to go ahead later this week.

Mr Justice Conor Dignam on Tuesday said that the teacher had raised strong grounds that would allow the court to make orders preventing Wilson’s Hospital School in Co Westmeath from proceeding with a disciplinary meeting due to take place on Thursday.

Due to the teacher’s ongoing refusal to comply with a court order requiring Mr Burke to stay away from the school until the proceedings have been determined, the judge said that the balance of justice was tipped in favour of refusing to grant the injunction.

Leo Varadkar hits back at Sinn Féin over Dowdall donation

Taoiseach Leo Varadkar has defended his party colleagues during a tense exchange in the Dáil chamber, rounding on Sinn Féin to explain a €1,000 donation from Jonathan Dowdall.

Mr Varadkar also questioned the legitimacy of an Oxfam poverty report, saying that billionaires in Ireland are all “fur coat and no knickers”, and defended attending Davos.

Taking the first Leaders’ Questions of the Dáil term since returning to the office of Taoiseach, Mr Varadkar was forced to defend public expenditure minister Paschal Donohoe, as well as Damien English, who resigned as a junior minister last week.

Mr Varadkar rebutted concerns raised by the opposition and shot back at them – querying whether the costs of paying for taxis during elections had been fully declared.

The Government has announced a multi-million euro scheme to repair Celtic Tiger-era apartments, after it was revealed that thousands across the State were not built to standard.

The Cabinet has agreed to draft legislation to support the remediation of apartments and duplexes with fire safety, structural safety and water ingress defects.

A working group report published in July found that up to 100,000 apartments and duplexes built between 1991 and 2013 were defective, with fire safety being the most prevalent issue.

The scheme is estimated to be worth between €1.5 billion and €2.5 billion.

A TD has said the delay in sending Irish soldiers to protect embassy staff in Kyiv was avoidable as recommendations were made in the Commission on the Defence Forces report.

More jobs in Ireland than there are people looking for work, says Irish LinkedIn boss

The head of Linkedin in Ireland has said there are more jobs in the economy than there are people looking for work.

Sharon McCooey was speaking on Newstalk’s Pat Kenny show about a new survey which found nearly three out of five Irish professionals are considering a new job this year.

The labour market was very tight now, she said. All through 2022 there were more employers looking for staff than there were people looking for jobs. However, remote working was an issue that was “still being worked out.”

“I’d say it will be two to five years before we actually get into a real rhythm of where we really understand how flexibility, hybrid, remote will work.

“Our employees work from home, they work remotely, and they sometimes work from another country. So, we have all of those different options in play.”