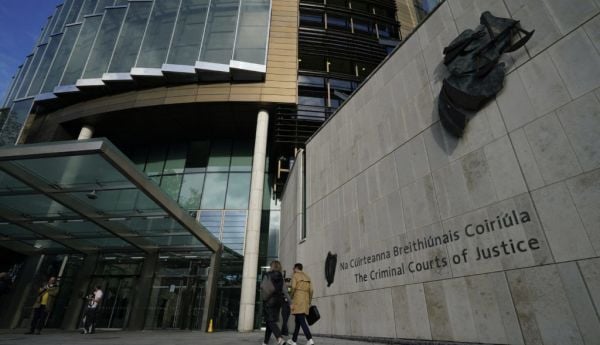 A man who broke into the home of his wheelchair using ex-girlfriend before assaulting her and throwing her dog on to the road has been given a three-year suspended sentence.

Gardaí found an imitation firearm in Keith O’Reilly’s rucksack after he was arrested for assaulting his former partner in May 2022, Dublin Circuit Criminal Court heard.

Garda Ronan Harris told the court that O’Reilly (31) sent the woman a number of threatening texts the day after they broke up, before he turned up at her home in Harold’s Cross, Dublin on May 25th and started knocking repeatedly on the door.

In the texts, O’Reilly told the woman he was going to take her dog, smash her face and smash her windows, Gda Harris told Monika Leech BL, prosecuting. He also described her disability in derogatory terms, the court heard.

When O’Reilly turned up at the woman’s assisted living home, she refused to answer the door and told him to leave. She thought he had gone when he suddenly appeared at a window and broke his way into her home.

The woman was part-way through a 999 call and had just told gardaí her name and location when O’Reilly pushed her over, causing her to fall out of her wheelchair, and smashed her phone on the ground.

The woman managed to get back into her wheelchair, grab her dog and leave the home through the back, but O’Reilly caught up with her and slapped her across the face before he took the dog and threw it on to the road.

Gda Harris said it was generally a busy street, but there was no traffic at the time and the dog escaped injury.

When gardaí arrived and arrested O’Reilly, they found an imitation firearm in his rucksack which he said he used to “shoot cans”. When the woman went back to her home, she found it had been ransacked and her phone was gone.

O’Reilly, with an address at Glenmore House, Swords, Co Dublin, pleaded guilty to one count of assault, criminal damage and production of a realistic firearm at Harold’s Cross, Dublin. He has no previous convictions.

The woman’s phone was never recovered.

Keith Spencer BL, defending, said his client’s behaviour on the day was “not attractive” and “uncharacteristic”. He said O’Reilly is remorseful for his actions and was somewhat intoxicated on the day in question.

He has a history of homelessness and drug abuse, but is now working for a car park company, the court heard.

Sentencing O’Reilly on Wednesday, Judge Martin Nolan said he had taken into account a letter from the woman which he said was “very Christian”.

“She asks me not to send the man to prison by reason of his good behaviour towards her in the past and her belief that everyone is entitled to a second chance,” Judge Nolan said.

He said what O’Reilly did was very serious and he obviously lost control, but the judge said he was taking the woman’s request very seriously.

Judge Nolan said he felt it unlikely that O’Reilly will re-offend and took into account his lack of previous convictions before he suspended a three-year term of imprisonment on full on strict conditions.

“You should be ashamed of yourself,” Judge Nolan said before he added that it was only because of the woman’s Christian views that he was not going to prison.