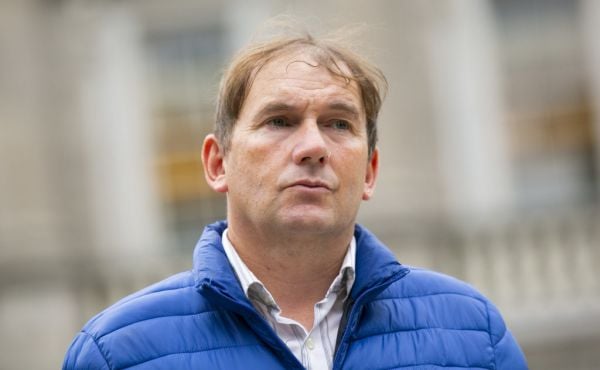 People Before Profit TD Gino Kenny has vowed to continue to stand against anti-refugee rhetoric, after far-right figures threatened to come to his family home.

The threat followed his attendance at a counter demonstration in Clondalkin.

In a statement on Tuesday, Mr Kenny said far-right figures have been “targeting me and my family. They have spread lies about me and threatened to come to my home”.

Speaking to BreakingNews.ie, Mr Kenny vowed to continue to stand against anti-refugee protests and intimidation of people in Direct Provision centres.

“I think it’s important that this is challenge if individuals or far-right parties post your address or a picture of your house to incite people to come up to it. That’s incitement, and it completely crosses the Rubicon in relation to intimidation.

“It has to be called out, because people cannot be intimidated that way, and that’s what fascist elements in this country are trying to do… they’re trying to intimidate people and sow hatred and division.”

Since Thursday members of the Far Right have been spreading lies about me and threatening to come to my home. I will not be intimidated. The majority of people in Clondalkin and across the country reject the far right and their message. #RefugeesWelcome pic.twitter.com/LScLDK5lfy

Anti-refugee rhetoric has been prominent online, with slogans such as ‘Ireland is full’ circulated by the groups involved.

Mr Kenny said “the vast majority of people do not fall for it, but some people get sucked in by it”.

“That doesn’t mean these people are racists as such, but I would strongly say to people if they are looking at this material, think again.

“The people that are the cause of the housing crisis, the problems in the health services, are not immigrants. It’s because of successive failed policies of Fine Gael and Fianna Fáil.”

He called on everyone who stands against racism to continue to call out the anti-refugee protests, which have popped up nationwide.

“The vast majority of people in Ireland are disgusted by protests outside Direct Provision or international protection centres, sickened by it.

“It’s important to continue this as a public representative. I represent Dublin Mid-West, some people may disagree with certain stances from all politicians, but I think it’s really important that people are not intimidated, and that this does not go unchallenged.

“When fascists try to organise in different parts of the country, some of them even identifying themselves which is very troubling, spreading lies, misinformation, that has to be challenged cross-community… from everybody who rejects this slander against refugees.

“The vast majority of people in Ireland are disgusted by protests outside Direct Provision or international protection centres, sickened by it.

“These are fringe elements that are whipping this stuff up. The vast majority of people reject it, but it’s important that when it does arise it is challenged.”

While counter demonstrations are important, Mr Kenny said anti-refugee rhetoric had to be challenged online and when speaking to people as well.

“Some people say there are questions they want addressed, and I’ve no problem addressing issues and concerns people may have, once they’re in a rational manner.

“I’ve no problem with it and I have done that on numerous occasions, people have concerns for the welfare of immigrants, concerns around other things which I have tried to address, largely when you address those issues most people are satisfied in relation to these concerns.

“Some people are playing on others’ fears… claiming some refugees are a threat, all sorts of names I can’t even repeat., they’re just horrible. They malign people and dehumanise people by putting labels on them. That’s just not acceptable, so it has to be counteracted in every way.”

This Saturday say it loud say it clear – refugees are welcome here!

Join the rally at 12 pm at the Clondalkin civic offices and let’s send a clear message that Clondalkin says no to racism. pic.twitter.com/aaMZwC0oKg

Mr Kenny said there will be a rally in Clondalkin in support of refugees at 12pm at the local civic offices, and he encouraged people to attend it.

“That’s what we’re doing and there will be a whole host of people there from Clondalkin and other areas. It’s a welcoming, well integrated place, there’s never been an issue and that’s the way we want to keep it.”