Thousands of tyres dumped on forest land in Co Meath 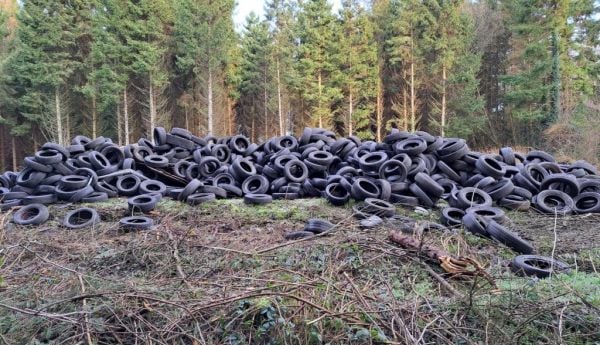 Meath County Council is investigating the dumping of more than 3000 tyres on forest land by “unscrupulous waste collectors”.

It is understood the tyres were dumped on private land near Longwood village last Thursday night.

The landowner is now facing a hefty clean-up bill of an estimated €7000 and the council is urging all private owners to secure their properties with gates and fences.

In a statement the council said: “The waste tyres would have been generated by tyre suppliers and/or fitters and dumped by unscrupulous waste collectors collecting waste.

“The council estimates that in excess of 3,000 waste tyres have been dumped at this location which will cost over €7,000 to collect.

“The private landowner is being contacted to advise them of the dumping as they will be responsible for the clean-up costs as it occurred on private land. Meath County Council would urge landowners to secure their land with locked gates and fencing to deter this activity from occurring.”

The council’s senior executive engineer, Declan Grimes, has also asked any motorists who may have noticed anything suspicious or who have dash-cam coverage to contact the council.

“The R160 Trim to Longwood regional road is a very busy route and Coillte and private landowners have forests along the route.

“Whoever drove the truck took a risk of being bogged down in muddy land and of being seen.

“A member of the local fire services noticed the tyres while driving by and reported it to Meath County Council with concerns that if they went on fire, the flames could easily spread to the surrounding forests. Meath County Council carried out an immediate inspection of the area and notified all parties concerned.”

Last September, the council had to undertake a clean-up of 117 tyres and car parts dumped on a rural roadside in Kentstown. That was only weeks after 50 tyres, 23 five-gallon and three 45-gallon barrels of oil were discarded outside Dunshaughlin.