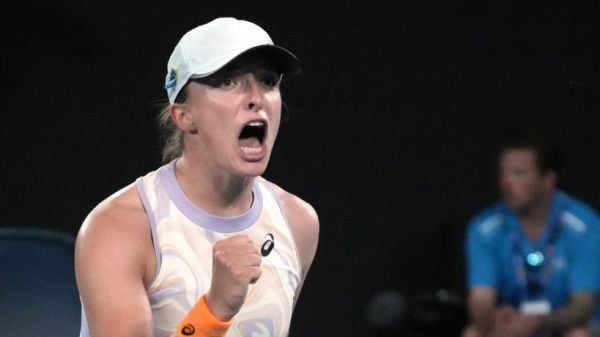 World number one Iga Swiatek put her first-round struggles behind her as she eased past Camila Osorio at a soggy Australian Open.

Swiatek had to fight back from 5-3 down in the second set against Jule Niemeier on Monday but was much more comfortable in her 6-2 6-3 success against Colombian Osorio to reach round three.

The negative for the Pole was that her serve was broken three times, including when she served for the match at 5-1 in the second set, but she took her next opportunity.

All aboard the 1GA Express 🚂

Swiatek said: “It was really intense and pretty physical. I think it was much tougher than what the score says.

“Camila, she’s a great fighter. She didn’t give me many points for free but I’m happy I was solid and I could finish it.”

The match was played under the roof on Rod Laver Arena because of rainy conditions at Melbourne Park that threatened to cause scheduling problems for organisers after Tuesday’s extreme heat and storms.

Top seeds like Swiatek, Jessica Pegula and Maria Sakkari were through to the third round before some players had even started their first-round matches.

Pegula came into the tournament as one of the most in-form players and the third seed, who is chasing a maiden grand slam title, defeated Aliaksandra Sasnovich 6-2 7-6 (5).

Pegula’s parents own the Buffalo Bills NFL franchise and she wore the number three on her skirt to offer support to Damar Hamlin following his cardiac arrest.

She said: “I definitely wanted to do something on my outfit. I was in Sydney when it happened so I didn’t have time to do it there.

“I thought it would be a fun way to connect with the team and then also just show my support. I felt like it was a global event. A lot of people were asking me about it even here.”

Sixth seed Sakkari looked she might be the first big casualty of the women’s tournament but she recovered from a set down to defeat 18-year-old Russian Diana Shnaider 3-6 7-5 6-3.

Greek Sakkari said: “It was extremely tough. There were moments in the match where I thought I was going to lose, but then my belief somehow woke me up. She was playing with nothing to lose, she was playing very, very good. I’m glad I found a way to win.”

Former finalist Petra Kvitova, seeded 15th, did go out in the second round, losing 7-5 6-4 to Anhelina Kalinina.