IN the end, the Nolan family were the big winners of the Fitzgibbon Cup clash between SETU Carlow and Mary I on Wednesday evening.

Rather than seeing either one of Chris or Jon Nolan disappointed at the final whistle, the two brothers both probably left satisfied after a 1-16 apiece draw, when it looked like had both teams had perhaps lost the tie completely late on.

Normally team-mates for Mount Leinster Rangers or Carlow, the brothers had the unique situation of lining up against each other, and typically both got on the scoresheet.

There was late drama when both teams scored goals in injury time, Kenny Ryan struck first for Carlow to make it 1-15 to 0-16, but straight from the puck out Mary I responded in kind when Cartach Daly hit the net. There was just about enough time left for Chris Nolan to secure a draw with his fifth point of the game.

SETU Carlow’s next game in the competition is on Wednesday 1 February away to DCU. 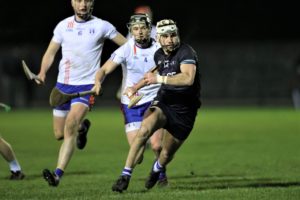 Chris Nolan hit a late equalising point for SETU Carlow against Mary I in the Fitzgibbon Cup on Wednesday evening
Photo: Pat Ahern

Earlier on the in evening, SETU Carlow’s footballers bounced back from opening round defeat in the Sigerson Cup to St Mary by beating MTU Kerry 2-12 to 0-15 thanks to two goals from Louth’s Eoin Hackett. Paraic Deering, Conor Doyle, Josh Moore and Colm Hulton all started in the win.

On Tuesday, SETU Carlow’s camogie team recorded a comfortable 6-15 to 0-5 win over UCC in the second round of the Purcell Cup with Helen Roche, Ciara Kavanagh and Emma Cody all playing their part.