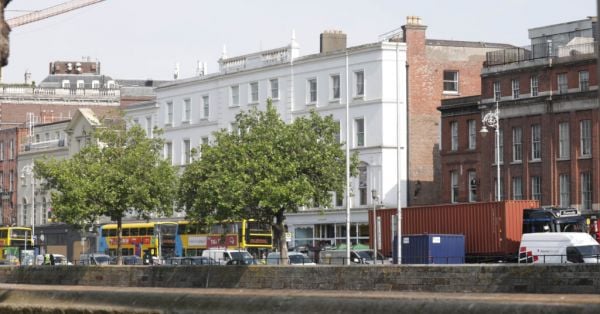 A man has been handed a 16-month prison sentence for a “particularly violent” assault, which was captured by CCTV on a nearby Dublin Bus.

Judge Martin Nolan said Kearney had assaulted the injured party in a “particularly violent way” following a dispute between the pair, imposing a prison sentence of 16 months.

Garda Eric Downey gave evidence that Kearney and Mr O’Toole came to garda attention prior to this incident as they appeared to be having a disagreement.

The men told gardaí they were friends and there was no issue and the pair then walked away in the direction of the Ha’penny Bridge.

Later, gardaí received a report of a man lying unconscious on the ground who appeared to be bleeding from his nose, mouth and the side of his head.

Mr O’Toole was observed by gardaí to have sustained an injury to his face and was taken to hospital by ambulance. He later discharged himself and no medical report was prepared.

Mr O’Toole did not cooperate with the investigation and no victim impact statement was submitted.

A Dublin Bus driver told gardaí he had seen the assault and CCTV from the vehicle was played to the court.

Kearney attended the Garda station by appointment and was later arrested. He has 77 previous convictions, including three for theft and one for violent behaviour in Garda station, all of which were dealt with by the District Court.

Gda Downey agreed with John Berry BL, defending, that Aston Quay is known as an area where drug users congregate. The garda agreed that the accused had drawn the attention of gardaí due to the men’s disagreement but could not say if it was related to a drug transaction.

Mr Berry suggested to Judge Nolan that Kearney’s guilty plea should be given additional value due to the injured party’s limited cooperation with the investigation. He said his client’s guilty plea was an indication of his remorse and shame.

Mr Berry said his client is homeless and is on a waiting list for social housing.

Kearney’s partner was in court to support him and the court heard he has drug difficulties and is engaging with services.

Documents, including a letter from the Ana Liffey Trust, were handed to the court.