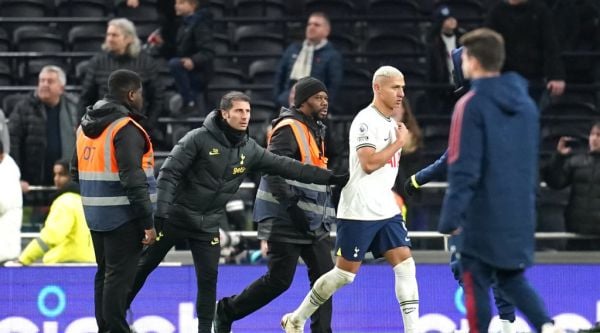 Tottenham forward Richarlison has avoided retrospective action from the Football Association for his heated exchange with Arsenal’s Aaron Ramsdale at the end of Sunday’s north London derby, the PA news agency understands.

Spurs substitute Richarlison was involved in a coming together with Ramsdale following the 2-0 defeat and appeared to push the goalkeeper in the face.

A steward had to separate the pair and immediately after the incident Ramsdale was kicked by a Tottenham supporter, who climbed onto an advertising hoard behind the South Stand.

The fan,  who has since been named as 35-year-old Joseph Watts, has been charged with assault by Metropolitan Police.

The FA strongly condemned the attack on Ramsdale and described it as “wholly unacceptable behaviour” but they were also understood to be looking into the clash between Arsenal’s goalkeeper and Richarlison.

No further action will be taken, however, with the incident believed to have been seen and managed appropriately by referee Craig Pawson at the time.