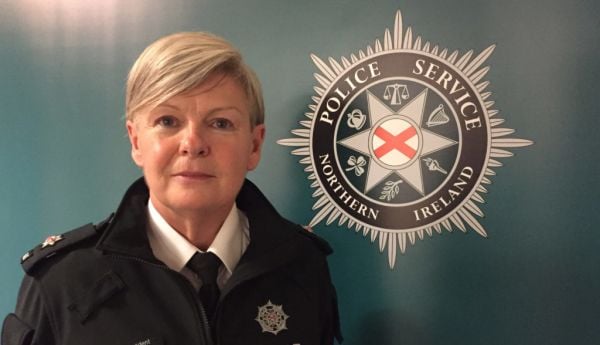 A senior police officer in Northern Ireland has been handed a fine and driving disqualification following a drink-driving incident on Christmas Eve.

District Judge Rosemary Watters described a “big mistake” as she heard how Chief Superintendent Patricia Foy, who headed the PSNI’s Professional Standards Division, took the decision while off duty to drive to a shop after two or three gins.

Ms Foy (57), whose address was given as PSNI headquarters, appeared in person before Lisburn Magistrates’ Court in Co Antrim on Thursday morning.

She was charged with driving with excess alcohol, failing to stop at a damage-only accident and driving without due care and attention.

The court heard that on Saturday, December 24th at about 4pm, police were made aware of a damage-only road traffic collision, where a car had collided with a traffic light.

Police also received a report about a car colliding with a parked car.

Officers observed the defendant walking from the vehicle to her home address where she failed an alcohol breath test and was arrested.

A lawyer for Ms Foy said she regrets finding herself before the court and apologised for the incident.

He said she had served the public with distinction for 34 years, but has been suspended as a result of her actions.

“On the day in question, Christmas Eve, she made the very foolish decision to drive a three-minute journey to the supermarket to buy some last minute provisions for Christmas Day,” he said.

“She can remember obviously certain aspects of the day, she had consumed perhaps two (or) three large gins, made the foolish decision to drive, she has little memory or recollection at all of the collision at the traffic signal, or much of returning home.

“She has since consulted with a psychologist.”

Judge Watters commented: “Of course, I think we all know that if you have too much to drink sometimes you don’t remember what happened.”

Ms Foy’s lawyer continued saying that there had “understandably been public interest” in the case, adding there has also been “a certain amount of unhelpful or unpleasant social media comment”.

“She realises that she erred on this day, there is no excuse that I can proffer on her behalf,” he said, adding that she had a clear record.

Judge Watters described the incident as a “big mistake”.

“I suppose people who drink and drive always make big mistakes, I will deal with this defendant in same way I would deal with anyone else,” she said.

Ms Foy received a fine of £250 and was disqualified for 18 months for the drink-driving offence.

The driving bans will run concurrently with Ms Foy being banned from driving for 18 months, and then having to retake her driving test.

A PSNI spokeswoman said: “The officer remains suspended. We have no further comment to make at this time.”