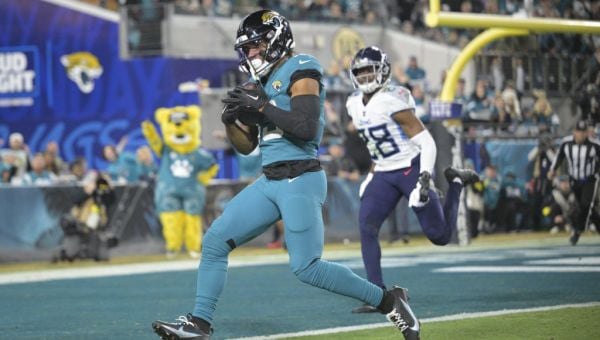 Jacksonville Jaguars wide receiver Christian Kirk says the perennial underdogs are ready to once again bare their teeth fresh from pulling off one of the greatest comebacks in play-off history.

The lifeless Jags had recorded the NFL’s worst regular season record in each of the last two seasons, making this year’s turnaround all the more impressive.

The appointment of head coach Doug Pederson and smart off-season acquisitions like Kirk have complemented nascent quarterback Trevor Lawrence and helped them win the AFC South.

More excitement followed as the Jags bounced back from 27-0 down in last weekend’s wild-card clash with the Los Angeles Chargers to win 31-30 – the third-largest comeback in NFL post-season history.

“Unfortunately, I think in the first half some of the play-off nerves and stuff like that were setting in,” wide receiver Kirk, who scored a touchdown against Chargers, told the PA news agency.

“We were trying a little bit too hard to make something happen. There were just some small things that kind of got away from us. We dug ourselves a hole offensively. Not a situation that you want to get in.

“But we came in at half-time and everyone kind of told one another ‘we’ve been here before’ – we’ve done this so far this season, come back from some deficits and been able to win the game.

“We just knew we had to take it one play at a time, defence get some stops and offensively we have to score every time we get the ball. We’re able to go out there, trust in one another and do that.

Job not done yet!! On to the next!! #DUUUVAL

“It was a big moment for our team and this organisation, but quickly after we kind of flushed it and were able to move those emotions onto Kansas City.”

The Jaguars are purring as they prepare to take on the Kansas City Chiefs on Saturday, having won six games on the trot and lost just once since their 27-17 defeat at Arrowhead Stadium in week 10.

“Early on in the season we were getting written off – nobody was expecting us to do anything,” Kirk said of the Jags, who will return to their home away from home Wembley later this year to play a 10th game in London.

“We got a couple of wins, showed that we can play some good football and then went on a five-game losing streak in October. That was a low point in the season and a tough time for us. Everybody kind of forgot about us.

“We came out of the bye week midway through our season (following the Chiefs loss) and said ‘hey, we’ve got to commit to this – if we want to accomplish all our goals, we have to win every game from here on out’.

“Obviously in that span we lost a game but we started stringing together some wins and really playing the football that we wanted to play and just trusting one another.

“Slowly but surely I guess people started putting some recognition of what we can do and obviously winning the AFC South was a big feat for us.

“We kind of like being the underdog and just kind of flying under the radar, and just trusting in everybody in this building, not worried about what anybody says outside of this building because we know the type of team that we are.”

Who’s punching their ticket to the AFC Championship? #NFLPlayoffs

That approach explains why the Jags are not ruffled by the fact pundits and bookmakers expect Saturday’s AFC divisional clash to go the way of the Patrick Mahomes-inspired Chiefs.

Instead, they are relishing their underdog title and continuing to harness the mindset of “fear nothing and attack everything” that Kirk says has served them so well.

“We’ve been the underdog in probably the last, I don’t know, eight games that we’ve played in, so it’s nothing new to us,” the wide receiver added.

“We don’t expect anybody to come out and say that we’re going to be world beaters and champs, and we’re the best team by any means.

“We know that every game is going to be a challenge for us and that’s alright. We believe in the guys that we have in this building to get it done.”