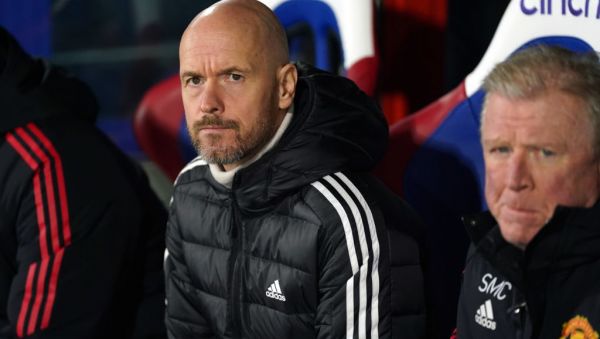 Erik ten Hag is confident Manchester United can frustrate Arsenal again as his side look to do the double over the Premier League leaders.

A mightily impressive first half of the campaign has the Gunners atop of the standings and fans beginning to dream of a first league crown since Arsene Wenger’s Invincibles triumphed in 2004.

Arsenal head into the weekend five points clear of Manchester City and boast a game in hand on both the reigning champions and third-placed United, who will attempt to hack away at their eight-point gap on Sunday.

Ten Hag’s improving side head to north London buoyed by a superb unbeaten run and the knowledge that they are the only team to have beaten Mikel Arteta’s men in the league this season.

“It is obvious they are in a really good run and I think they deserve the position where they are now,” said the United boss, who oversaw September’s 3-1 Old Trafford victory against the Gunners.

“So, they are in a great run but it is up to us to beat that run and we will do everything to do that.”

Asked if he was surprised to see Arsenal leading the league at this stage, Ten Hag said: “No. In the moment we played them, you could already see that the manager with his coaching staff was for a long time already working on that team.

“You see really good structures in the team and I think they even improved during the first half of the season.

“But if we do, I think we have a good chance also to get out of that performance a good result.”

United were just minutes away from rolling into the Emirates Stadium on a 10-match winning run in all competitions.

Michael Olise’s stunning late free-kick saw Wednesday’s rearranged trip to Crystal Palace end in a 1-1 draw – a frustrating end to a night that also saw Casemiro ruled out of the Arsenal clash.

The Brazil midfielder, who has flourished since swapping Real Madrid for Old Trafford in the summer, has to serve a one-match ban on Sunday after picking up his fifth booking of the season.

“We beat last time Arsenal without Casemiro,” Ten Hag said. “We have an idea of how to do it (again), yeah.”

Diogo Dalot and Anthony Martial will be assessed before travelling to the capital, where Jadon Sancho is unlikely to feature despite returning to first-team training.

Last month Ten Hag said the 22-year-old was “not in the right status or fitness state” having done an individual fitness programme in the Netherlands rather than travel to the squad’s winter camp in Spain.

The United boss said patience was paramount with Sancho, who resumed group training on Tuesday having returned to Carrington earlier in the month.

Asked when Sancho will make a first-team return, Ten Hag said: “I can’t answer that question.

“He is making the next step because it’s true (Tuesday) he was for the first time in team training, but team training is the final day before the game. So, we will extend that in the coming days, the coming week and then go step by step.”

Sancho’s return will be a boost to United, who currently look unlikely to make any further signings this month having brought in goalkeeper Jack Butland and striker Wout Weghorst on loan.

But Ten Hag, who saw star Cristiano Ronaldo leave in November, has not completely closed the door on further January arrivals.

“That is what we will do. We will be doing our research and if there are opportunities, yeah, we have to go for it.”