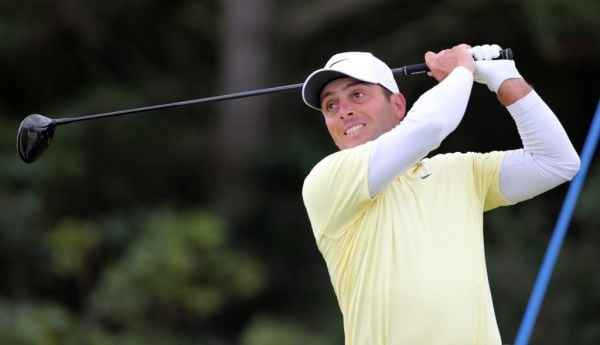 Francesco Molinari’s welcome resurgence gathered pace as the former Open champion claimed a share of the lead in the Abu Dhabi HSBC Championship.

A second consecutive 67 at Yas Links gave Molinari a halfway total of 10 under par matched only by compatriot Guido Migliozzi, who birdied his final three holes to return a 69.

Molinari won three times in 2018, including the Open at Carnoustie and BMW PGA Championship at Wentworth, before becoming the first European player to compile a perfect 5-0 record in that year’s Ryder Cup.

The 40-year-old also held a two-shot lead with seven holes to play in the 2019 Masters before hitting his tee shot on the 12th into Rae’s Creek, and has not had a top-three finish in a strokeplay event since winning the Arnold Palmer Invitational a month earlier.

However, Molinari was unbeaten in captaining Continental Europe to victory in the Hero Cup win last week and recovered from dropping three shots in two holes to mark six birdies in an inward half of 30.

“I’m very pleased,” Molinari said. “Same score as Thursday but very different day. Many more ups and downs than yesterday. A couple of three-putts, a couple of mental errors but also lots of good stuff, a couple of long putts made.

“Obviously a very good back nine, which is nice. I think where I’m at at the moment, when you go through a tough patch, it’s nice to see that I can pick it up again.

“I don’t want to get ahead of myself. It’s a couple of good rounds but I know, I’m aware of where I’m coming from. The game feels different. I think it looks different, too. But yeah, it’s just two rounds, so a long way to go.”

The obvious goal for Molinari this year is a fourth Ryder Cup appearance on home soil in Rome, and he admitted: “It would be incredible.

“There’s many months to go. It’s obviously nice to start the season this way. I never needed a pick for my three Ryder Cups, so it would be nice not to need a pick again this year.”

Migliozzi, who matched Molinari in winning three and a half points from his four matches in the Hero Cup, had been level par for the day until three brilliant approaches set up birdies on the 16th, 17th and 18th.

“It’s been a tough day of golf,” said the 25-year-old, who won his third DP World Tour title in the French Open last September. “But I stayed focused, I tried to stay on my game because I’m feeling great on the golf course and I was just waiting for some turning point.

“I saved that beautiful par on 15, then after that I felt a bit better and I could accelerate, push on the accelerator and then beautiful golf shots came on the final three holes. Those three holes are very, very tough because the wind is hurting a lot. It was good to finish like that.

“I was watching the leaderboard and I saw the captain right there on top, Francesco Molinari. It will be a great battle over the weekend and a pleasure to play together.”

Australia’s Jason Scrivener lies a shot off the lead following a second round of 70, with former Open champion Shane Lowry among the group two strokes further back after also returning a 70.

Overnight leader and Ryder Cup captain Luke Donald fell five shots off the pace after adding a 75 to his opening 64.