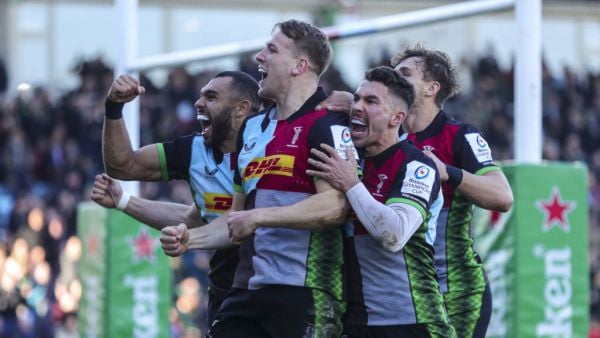 Harlequins took advantage of crisp conditions to end their victory drought with a 39-29 win against the Sharks that propels them into the Heineken Champions Cup knockout phase.

Danny Care celebrated his 350th appearance for Quins with a try and there were also touch downs for Alex Dombrandt, Cadan Murley, Stephan Lewies and Nick David in a comfortable bonus-point triumph.

The 2021 Gallagher Premiership champions revelled in the sunshine at Twickenham Stoop to continue the revival begun against Racing 92 a week earlier, clinching their first victory since December 18.

They led 21-8 in the first 20 minutes alone and having faced a spirited comeback from a Sharks team featuring South Africa stars Siya Kolisi, Eben Etzebeth, Ox Nche and Lukhanyo Am, they accelerated clear once more in the third quarter.

Murley and man of the match David were their most influential performers, their explosive running leading the way after weeks of rain and icy weather had robbed Quins of their attacking mojo.

At times it was a superb spectacle and a high octane start alone produced three tries inside the opening 10 minutes.

While Am pounced first for the Sharks, the lead was quickly overturned. Care was the first over the whitewash with a show and go from short range and the visiting defence was also taken apart moments later when Dombrandt touched down.

Andre Esterhuizen, Marcus Smith and David had made key contributions to a brilliant second try and in the 18th minute they struck again when a commanding maul was followed by deft handling to provide Murley with a simple run in.

Harlequins pressed again but the Sharks held out this time and when wing Marnus Potgieter punched a hole in their defence, scrum-half Jaden Hendrikse was in support to finish.

Having been staring down the barrel, the South African side continued their revival through an opportunistic try by Etzebeth, who seized the ball at the base of a ruck under the nose of Care and galloped over.

Care protested furiously and Dombrandt sought clarification from referee Nika Amashukeli as the scrum-half had not lifted the ball when Etzebeth intervened, but the problem was with Joe Marler’s binding.

Tries continued to come thick and fast as Lewies went over from a line-out drive and following a spell of end to end play David ran in his side’s fifth with a solo try made possible by his vision and speed.

Murley blazed upfield but the England prospect just lacked the gas to finish the move before Smith landed a penalty to extend the lead to 19 points.

Repeatedly when the Sharks moved into home territory they were penalised for a breakdown offence, but pressure was building and they were finally over in the closing stages through full-back Aphelele Fassi.