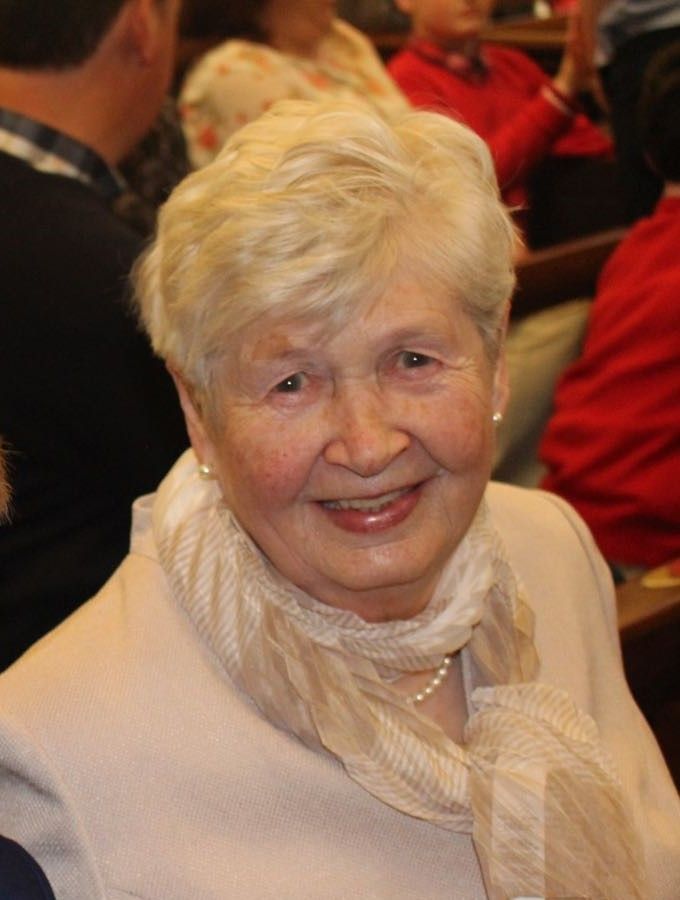 THE death took place peacefully at her home on Tuesday 13 December, surrounded by her loving family, of Sabina Reddy, Kyleballyhue, Carlow. A highly respected member of the local farming community, Sabina’s passing followed a number of years of failing health.

The life of Sabina Reddy was captured in a eulogy delivered by her daughter Sadhb in St Patrick’s Church, Rathoe during her funeral Mass on Thursday 15 December.

Sadhb welcomed the congregation for gathering “to celebrate the life of a woman who had lived life to the fullest”.

She said her mam was born Sabina Christina Walsh in 1932 in Killerig, Carlow, the youngest in a family of three. “She didn’t have the easiest of lives, but made the most of everything that came her way.

“At the age of 12 she lost her father. Then, in 1947 at the age of 15, Mam came to stay in Kyleballyhue with an elderly relative, Kate Ireton, who had just lost her brother. Mam was not to leave Kyleballyhue for good again until today – some 75 years later.”

Continuing the tribute to her mother, Sadhb said that while most teenagers and young adults were attending céilís and dances, Sabina spent her time with her elders, gaining an encyclopaedic knowledge of almost every inhabitant of Co Carlow.

“She also had her nieces Mary, Breedeen, Attracta, Sabina, Therese and Frances come stay with her during their summer holidays. Many the story has been told of the mischief they got up to – behind Aunt Sabina’s back, of course.

“On her arrival to Kyleballyhue she became a farmer overnight and remained so to her dying day, regularly asking, even up to recently, the price of cattle, how much land was making and the statistics for the tillage harvest. In 1967, she and another lady from Athy won the award for the best wheat in Ireland.”

Sadhb said that Kate died in 1967, so Sabina, at the age of 35, went to her first dance with her nieces Mary, Breedeen and Sabina to hear Joe Dolan and The Drifters perform in the Dreamland Ballroom, Athy.

“She and Dad – Liam Reddy – met that night, and six months later they were married. They proceeded to have their children – the four of us – and from then on everything she did was for Dad and us, and subsequently her grandchildren.”

Continuing, Sadhb said her mother hugely valued education and was adamant that each of her four children would go to university, regardless of the career they would ultimately choose.

“Times were tough in the 1980s for everyone, but Mam and Dad managed to send Pat, Billy and Mary in the 1980s and myself in the 1990s to university in Dublin. She was forever grateful to Donagh O’Malley for introducing free education – and anyway, she was a Dev diehard at heart.”

Upon her retirement at 65, she returned to education in St Patrick’s College, completing certificate and diploma courses. She enrolled on the degree programme with Maynooth University, but unfortunately, in November 1998, when she and Liam were visiting Pat in Los Angeles, Liam suffered a stroke, so Mam spent the following eight years caring for him at home until his death in June 2006.

Sadhb said her parents had many happy trips to the UK to visit Mary and Kevin, until Liam was no longer able to do so.

Sabina, she said, then took up a new career on the birth of her first grandson Ben, minding him in Dublin and then doing the same for grandchildren George and Ella.

“She adored her grandchildren and travelled to LA to see Sadhb a couple of times and regularly flew to Vienna to spend time with Billy, Vjola, Keana and Rae. Had she been able, no doubt, she would have travelled for the birth of Chris, too.

“Over the past few years, Mam suffered a few setbacks health-wise, but she always bounced back and lived to fight another day. John, Lexi and I were privileged to spend the last ten years living with Mam, helping her out when she needed.

“Unfortunately, this time the fight was up because, as Mam would say, ‘her time had come’.”

Sadhb extended the Reddy family’s thanks to Fr Jim O’Connell, PP, Ballon-Rathoe for attending Sabina over the past couple of years and as chief celebrant of her requiem funeral Mass. She described her mother as one of the most devout people in the world, who loved Fr O’Connell’s visits.

There was also a sincere expression of thanks to Sabina’s GP Dr Helen Delaney for her care and kindness towards her, especially in Sabina’s final days.

Sadhb also thanked her mother’s team of carers – Esther, Bridget, Carmel, Martina, Liz, Stefania, Shannen, Lidiya, Helen and Anne. “The care and love you all showed for Mam was second to none and she loved the chats and laughs you all had together.”

The family also wished to acknowledge the fact that Sabina’s sister-in-law Ida, who is in the same age bracket as Sabina, travelled from Dublin for the obsequies. And there was also recognition for Sabina’s good friend and neighbour Dan Murphy, who kept her fully informed on all the happenings in the locality.

Sadhb finished her eulogy by reciting a few words from the poet John O’Donohue: ‘May death arrive only after a long life to find you at home among your own with every comfort and care you require.’

Significant symbols of Sabina Reddy’s life were brought forward at the start of Mass, presented by six of her eight grandchildren. The presentation of the symbols was narrated by her grandson George.

Rae brought up a rolling pin, symbolising her granny’s love of baking. Sabina’s culinary skills were highlighted by her trademark brown bread, apple tarts and scones. Wheat, presented by Chris, represented his granny’s love of farming; the land was her life – growing crops, harvesting and rearing animals.

A newspaper was the symbol brought forward by Keana. Sabina loved keeping up the news, especially the local news, having deep care for the community around her. The Nationalist and the Irish Farmers Journal were her favourite newspapers.

Ben brought up a painting created by his granny. Sabina spent many afternoons painting with the Carlow Art Group. The painting presented was one of her best pieces.

A graduation certificate was presented by Ella, symbolising Sabina’s commitment to education. Finally, Lexi brought up a Bible, reflective of her granny’s deep and enduring faith.

The readings at Mass were by Sabina’s grandchildren Ben and Keana, with Prayers of the Faithful recited by her grandchildren and sons-in-law Kevin and John.

The beautiful singing of hymns at Mass was by Catrina Scullion, with Tom Kehoe, organist.

Following Mass, Sabina was laid to rest with husband Liam in the adjoining cemetery.

Survived by her children Patrick, Billy, Mary and Sadhb and her eight grandchildren, sons-in-law Kevin and John, daughters-in-law Vjola and Leah, relatives, kind neighbours and her circle of friends, Sabina was predeceased by her sister Brigid Walsh and brother Michael Walsh.