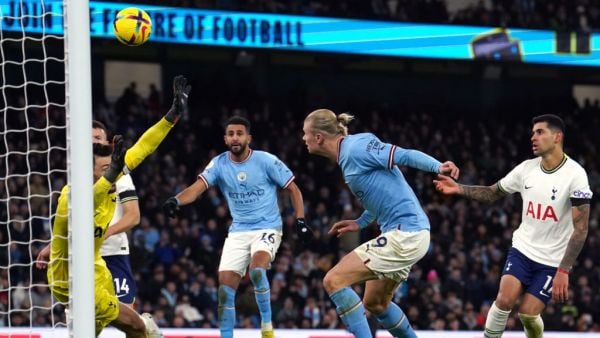 Antonio Conte hopes Tottenham’s second-half collapse at Manchester City can be a turning point in their season.

Spurs suffered a 4-2 Premier League defeat away to the champions on Thursday despite holding a half-time lead for the first time since October 12.

It continued Tottenham’s inconsistent form with three defeats in four league games this month, but Conte referenced a similar experience during his time in charge of Inter Milan as a catalyst for change.

Inter let slip a two-goal lead in similar fashion to lose 3-2 at Borussia Dortmund during the 2019-20 season and yet responded with a strong run where they suffered only one further defeat during the next three months.

“We have to try to find the same solidity of last season,” Conte admitted ahead of Monday’s trip to Fulham.

“I think we are in the right direction from my experience.

“In my previous experience for example, it happened in my first season at Inter Milan that in the Champions League we played against Borussia Dortmund. After the first half we were winning 2-0 and we lost 3-2.

“We were at the start of the process and I think this (Man City) game reminds me of the start at Inter Milan because in the second half we conceded three goals and it was really difficult, but then you have to go through this situation to improve and to go to another level.”

Conte again preached patience on Friday despite his current deal being set to expire in the summer, although the club do hold the option to extend it by a further 12 months.

He regularly described finishing in the top four last season as a “miracle” and admitted the Champions League qualification picture looks different this time around with fourth-placed Newcastle part of the mix.

“When you change a coach, then in January you send away or loan I think maybe four players and then you bring in two players, in this type of situation it’s very difficult to have this achievement – especially in England,” Conte said.

“To stay in the top four it means that one team like City, (Manchester) United, Liverpool or Arsenal have to stay out. Then you have teams that are going in an incredible way like Newcastle.

“I said this (was a miracle) because I felt we made fantastic achievement. For us it was also good not to have other competitions and to focus on the league, no injuries.

“This season we started to face four competitions, the Champions League costs you a lot of energy, you can make rotation, it’s the same for the Premier League, so the situation compared to last season is different.

“We tried to improve the squad this summer but you know this is only the start. If you think to send away nine players, then to bring other players is so simple to be competitive, I can tell you that we need time.”