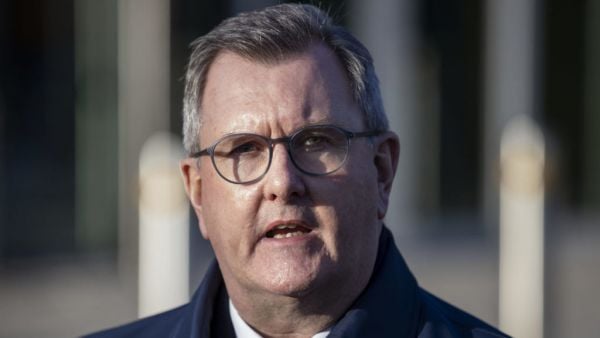 The UK Prime Minister must not serve up a “half-baked” deal to resolve the Northern Ireland Protocol impasse, the leader of the DUP has warned.

Jeffrey Donaldson cautioned against any interim arrangement with the EU as he urged Rishi Sunak to “get this done, and done properly”.

He also moved to downplay speculation that London and Brussels were on the cusp of striking a deal to end the stand-off over the contentious post-Brexit trading arrangements that have created economic barriers between Northern Ireland and the rest of the UK.

He said Cabinet ministers were advising him there was still “quite a gap” between to the two sides.

The protocol was agreed by the UK and EU in 2019 as a way to unlock the logjam over securing a Brexit withdrawal agreement.

Designed as a means to keep the Irish land border free-flowing, it moved regulatory and customs checks on goods to the Irish Sea, creating economic barriers on trade between Great Britain and Northern Ireland.

Many unionists in Northern Ireland are vehemently opposed to arrangements they claim have weakened the region’s place within the union.

The DUP is currently blocking the functioning of powersharing at Stormont and has made clear it will not allow devolution to return unless major changes to the protocol are delivered.

Donaldson told GB News the pressure was on the UK Government to deliver the “right deal”.

“I am very clear that we need to get this right and therefore I would say to the UK Government and to the Prime Minister, don’t go for a half-baked deal, don’t go for some kind of interim arrangement – let’s get this done, and done properly,” he said.

“That means dealing with the very difficult and challenging issues. That’s what leadership is about. So, I think the pressure is on the UK Government to get a deal done, but I want to see them get the right deal for Northern Ireland and for the whole of the UK.”

Sir Jeffrey indicated he did not believe a deal was imminent but said progress could be made in the coming weeks.

“I think that there’s been a lot of talk about improvements in the mood music, but any of the conversations I’ve had with senior Government ministers suggest that there’s still quite a gap to close on some very significant issues related to the Northern Ireland Protocol before an agreement can be reached,” he said.

“So, I’m not so sure that we’re on the cusp of an agreement, but it could be that in the next two to three weeks progress will be made on those major issues, but that remains to be seen.”

The DUP leader said arrangements whereby the EU sets laws on trade for Northern Ireland had to end.

“Fundamental to all of this is the question of who regulates the way that we trade within the United Kingdom,” he said.

“Who is responsible for making the laws that govern a wide range of issues of legislation. We are very clear that when it comes to trade within the United Kingdom it’s the UK Parliament and Government that should regulate how we trade, and then, of course, we’re happy to look at how we protect the integrity of the EU single market with practical measures that don’t breach the integrity of the United Kingdom.”

Both London and Brussels are keen to secure a breakthrough that would facilitate the return to the devolved institutions ahead of the anniversary of the Good Friday/Belfast peace agreement on April 25th.

The Government has tabled draft legislation – the Northern Ireland Protocol Bill – that would empower ministers to unilaterally scrap the protocol without the consent of Brussels.

However, Mr Sunak has paused progress of the Bill through Parliament as efforts to secure a negotiated settlement with the EU have ramped up.

Sir Jeffrey said it was “regrettable” the Bill was not currently progressing.

“I certainly think that the Protocol Bill gives the Government significant leverage, as does in fact the approaching anniversary of the Belfast agreement,” he said.

“Good Friday 1998, 25 years on and here we are, none of the political institutions established under that agreement are functioning properly, and that’s down to the harm caused to the Northern Ireland economy and to political stability in Northern Ireland, without a single unionist supporting the protocol elected to the Assembly in the elections last year in May.

“There is not a sustainable basis at the moment for the cross-community support required to re-establish and restore those political institutions.

“So, the Government has that leverage, but it is, I think, regrettable that they’ve been unable to proceed with the Northern Ireland Protocol Bill.

“I’ve said to the Prime Minister that in the event that agreement is not reached with the EU, then he needs to press on (with the Bill) and the Government needs to make good on the commitments they have given to the people of Northern Ireland to resolve this issue.”