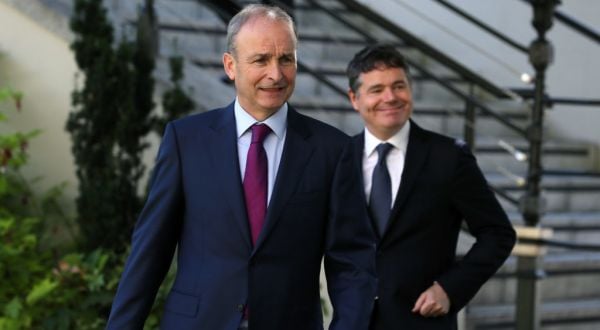 Micheal Martin has said he is satisfied with Paschal Donohoe’s explanation about the latest issue related to his election campaign expenses.

The Tanaiste and Fianna Fail leader said he spoke with the public expenditure minister over the weekend on the matter and he retains his confidence.

Fine Gael TD Mr Donohoe will make a fresh statement to the Dail next Tuesday on the swirling controversy over financial support received from a donor to pay for election expenses.

Last week, Mr Donohoe apologised to the Dail after it emerged he had not declared support from businessman Michael Stone totalling an estimated 1,057 euro – for payments to people to hang up election posters in the 2016 election campaign and the use of a commercial van for the job.

The issues emerged after a complaint was made to ethics watchdog Sipo (Standards in Public Office Commission).

Mr Donohoe has amended the expenses declaration to Sipo ahead of an anticipated probe by the watchdog.

On Thursday, the minister unexpectedly informed the Dail that he wished to make another statement to ensure the information he was providing to TDs was as “accurate as possible”.

He will make his statement on Tuesday afternoon and then field questions from opposition TDs on the matter.

The minister faced criticism for not answering questions during Wednesday’s exchanges in the Dail.

Sinn Fein and other opposition parties have been demanding that Mr Donohoe provides further details on his election expenses and links with Mr Stone.

In particular, they have asked for clarity around whether a similar arrangement with posters was in place for the 2020 election.

Questions have also been asked around whether the sums outlined by Mr Donohoe in relation to 2016 were at a value significantly lower than what the services might have cost in the open commercial market.

Mr Martin defended his ministerial colleague on Sunday, describing him as a “very honourable minister” who had the “country’s interest at heart”.

“He’s spoken to me over the weekend and I’m satisfied with what he has said to me,” he told RTE Radio One.

The Tanaiste dismissed the suggestion it was a resigning matter for Mr Donohoe.

“I think the idea that just because an issue arises and is debated in the House, and there is dispute about it, that in itself isn’t the basis for resignations,” he said.

“I do have confidence in him to continue to do his job as minister for public expenditure.

“I think he’s made a significant contribution to this government in terms of the cohesion within the government.”

He added: “I think he is a very capable minister. Of course I have confidence in him.”

She highlighted issues Sinn Fein has experienced in the past in relation to amending expenses returns as she accused the party of “hypocrisy” in regard to Mr Donohoe.

“I’m really reminded of the old adage of not to throw stones in glass houses,” she said.

Ms Naughton said her party colleague had been “completely open and transparent”.

“He is somebody of great integrity, who takes this matter extremely seriously,” she told RTE.

“He has committed to coming before the Dail next Tuesday for a questions and answer session with the Opposition.

“He has committed to that and I have no doubt that he will do that, and clearly state the facts on the Dail record.”

Sinn Fein TD Matt Carthy, who described Mr Donohoe’s series of statements as a “debacle”, rejected Ms Naughton’s contention and noted his party was not being investigated by Sipo.

“She can’t on the one hand say that we have to respect the Sipo process and then on the other hand try and throw allegations out in respect of a party that is actually fully in compliance with Sipo,” he told RTE.

“If he was being transparent with this issue, he would have responded to questions and answers last week in the Dail,” she told RTE on Sunday.

“The reason that he’s coming before the Dail again next week is because he refused to do that.

“So the minister could have, if he responded to the Opposition’s questions last week, and put it all out on the table, he could have had this dealt with by now and he hasn’t.”