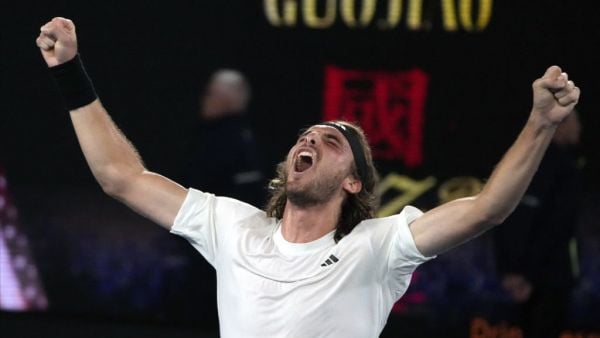 Stefanos Tsitsipas survived a compelling five-set battle with Jannik Sinner to reach the quarter-finals of the Australian Open.

The Greek, a semi-finalist in three of the last four years and the highest-ranked player remaining, has looked a man on a mission since arriving in Melbourne and had not dropped a set prior to this clash.

For two sets he appeared in control against Italian Sinner, seeded 15, but the wheels began to come off in the third and his opponent, who remarkably took only four of the 26 break points he created, fought back to level with some terrific power tennis.

Sinner, who lost an epic five-setter to Carlos Alcaraz in the US Open quarter-finals, seemed to have the momentum, but he lost his way at the wrong moment and Tsitsipas thrilled the many Greek fans packed into Rod Laver Arena by completing a 6-4 6-4 3-6 4-6 6-3 victory after exactly four hours.

“It was a long match,” said a delighted Tsitsipas. “I felt like I played an entire century in this court. What a great night. That was superb. A ripper as they say here.

“I’m really excited to be sharing moments like this out on the court. It’s not easy. I had an unbelievable opponent on the other side of the court playing incredible tennis in the third and fourth set. I stayed really calm.”

The third seed will now be the favourite to reach the final from the top half in what is becoming the sort of wide open grand slam draw – a limping Novak Djokovic aside – that men’s tennis has not seen for more than a decade.

Auger-Aliassime was the final victim of the ‘Netflix curse’, with all the players who featured prominently in the documentary series Break Point now having exited the tournament.

Lehecka, who now faces Tsitsipas, got the better of British number one Cameron Norrie in the third round and the 21-year-old is now through to the last eight at a slam for the first time after defeating Auger-Aliassime 4-6 6-3 7-6 (2) 7-6 (3).

Korda could not find the same consistently flawless tennis he showed against Medvedev but survived a nail-biting deciding tie-break, clinching a 3-6 6-3 6-2 1-6 7-6 (7) victory with a backhand winner after a 27-shot rally.

The 22-year-old is bidding to follow in the footsteps of his father Petr 25 years after his title at Melbourne Park, while his sisters Jessica and Nelly have both won the Australian Open in golf.

While both Petr and Korda’s mother Regina, who was also a professional tennis player, are very much involved in their son’s career, neither is in Australia, with Korda being coached by former Czech player Radek Stepanek.

Korda said of his family: “They stayed up. My oldest sister, she’s not playing this week. My other sister Nelly, I think she’s second place right now playing in a tournament. I hope she’s sleeping. I hope she didn’t watch and she’s getting ready for a big day today.

“I just got off the phone with them. They’re going to try to go to bed. My dad’s birthday tomorrow here. Early birthday present in a way.”

Korda also counts Andre Agassi as a mentor and touched both his father’s name and Agassi’s on the walk of champions as he headed out to Rod Laver Arena.

“Every single time I walk by, I always give (them) a little fist pump,” said Korda. “Kind of makes me feel like they’re with me in a way. I always know that they’re watching. They’re both very special for me. They helped me a ton.”

Russia’s Karen Khachanov won the first 14 games of his match against Yoshihito Nishioka before the Japanese player belatedly made a fist of things in a 6-0 6-0 7-6 (4) defeat.