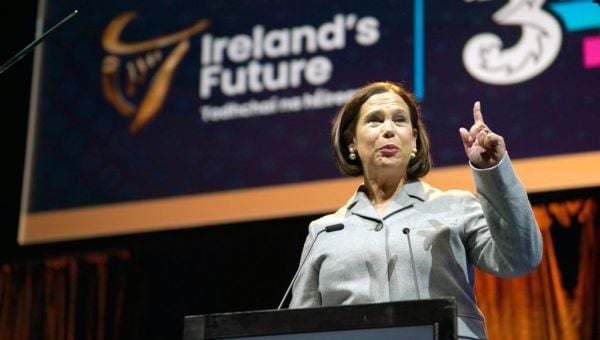 Debate around a United Ireland needs to move from cultural issues to practical and economic ones, according to political commentator Kevin Meagher.

Mr Meagher was a special adviser to former Northern Ireland Secretary Shaun Woodward, and is the author of ‘What a Bloody Awful Country: Northern Ireland’s Century of Division’ and ‘A United Ireland: Why Unification Is Inevitable and How It Will Come About’.

“The landscape argument for a United Ireland is there but the foreground of it needs to be painted,” Mr Meagher told BreakingNews.ie.

He argued that a United Ireland, and Border Poll, are both inevitable. However, he said both are subject to “different variables which will dictate the timescale and chronology of these events”.

Mr Meagher said the end of next year will be crucial, as Irish and British general elections are currently scheduled for 2025.

“The opinion polls in the Republic show Sinn Féin doing incredibly well over a period of two and a half to three years. They topped the poll in the general election with the popular vote in 2020, they have not really dropped back at all since.

“It’s a reasonable assumption that they may be there or thereabouts when it comes to forming the next Irish government. I wouldn’t put it any stronger than that because there is a whole range of variables. What’s the combined vote share of Fianna Fáil/Fine Gael/Green Party? They could potentially hold on again.

“Sinn Féin could potentially do a deal with a greener Fianna Fáil… if Micheál Martin was no longer leader. You get the intriguing prospect then of a coalition of everybody but Fianna Fáil and Fine Gael which would be a very new departure. When you start to tot up the centre left vote in these opinion polls you can get to 50 per cent. I’m sure it’s not as straightforward as that, no coalition is, but a Dublin government that is not Fianna Fáil or Fine Gael-led could be coming.

The difficulty from the Westminster perspective is there isn’t one constitutional fire burning, there are two burning intensely in Scotland and Northern Ireland.

“Also, a strong likelihood is the British election will be very close. Labour were miles behind in 2019 and left the Conservatives with a comfortable 80-odd seat majority. That lead seems to be eroding every day following the absolute chaos of the last 12 months. In the next 12 months we will have more chaos with a deep recession which will impact a lot of people and that will have a big impact on the electoral calculations people make.

“So it’s likely by the end of 2024 we’ll have a British general election where we have the Conservative majority whittled right down, a bit of a Labour surge… a bit difficult to pinpoint exactly if those things cross over with a majority Labour government or the Tories clinging on. Either way what is likely is a government in Westminster with a pretty small majority, that’s a reasonable assumption.”

He said the Scottish National Party (SNP) could end up with 60 seats in Westminster, adding that a “big chunk of the SNP will use the election as a proxy election on devolution”.

A renewed push for Scottish independence would have knock-on effects for Northern Ireland.

“At which point, politics being a practical business… the main parties will have to look and potentially deal with the SNP. The difficulty from the Westminster perspective is there isn’t one constitutional fire burning, there are two burning intensely in Scotland and Northern Ireland.

“If there was to be another Scottish independence referendum I suspect Scotland would vote to go this time. If that were to happen it would have big transfer effects into Northern Ireland and potentially vice versa as well.

“Plausibly this is the scenario of the next few years: In the North Sinn Féin is the biggest party in the Assembly, a majority of 18 MPs in Westminster are nationalist (SDLP or Sinn Féin). There are local elections in Northern Ireland in a few weeks when Sinn Féin and/or nationalist candidates could have the majority of the vote, so you have powerful electoral indicators of change.”

While opinion polls in the North and the Republic have had fluctuating results, Mr Meagher feels these can be misleading. He said the questions often ask people whether they would vote for a United Ireland tomorrow, which he feels is unfair given the lack of concrete ideas about what this would look like in practical terms.

“If you look at the specifics of questions, if you ask ‘would you vote for a United Ireland in the short-term, tomorrow?’ a lot of people would be hesitant about doing that. They want to learn from Brexit and have a proper deliberative process which is much more the Irish way than the British way.

“The British tradition of referendums is not as comprehensive as the Irish one, it’s basically ‘we’ll have a vote in a few weeks’ time, winner takes all’.

“I think with Irish voters they’re wanting the discussion, a model, scrutiny of that model, then we get to a vote… so polling isn’t always desperately helpful.

“A lot of people who want a United Ireland in the future tell me they wouldn’t vote for it tomorrow, so polling can be a red herring sometimes.

“The actual election results in Northern Ireland indicate there is a desire for change. The census is the same with Catholics, Protestants and a big group in the middle who don’t want to be defined in those terms of nationalist or unionists.

“There are people in the centre who are persuadable who can go either way based on a decent, rational argument. My view is it would be easier for United Irelanders to do that than it would be for the status quo.”

While many unionists don’t even want to consider a United Ireland, or Border Poll, Mr Meagher said many in the unionist tradition would be willing to consider change if it can bring improvements to their daily lives.

“There are people in the unionist tradition who would see the positives of EU membership, where arguments can be made. It’s about being able to align Northern Ireland into a more dynamic economy and framework with real life benefits for people.

“One of the clear benefits would be an extra two million people would give the Irish economy much more scale, a lot of potential new workers and consumers.

“Northern Ireland is not a basket case, it’s poorly functioning now, but it’s got good infrastructure, good schools… some really talented people. It would not be a drain on Irish resources it can be a big advantage.

“It’s about painting some of these advantages and also talking about the institutions and then looking at things around culture, heritage, emblems and all that. Talk around flags, national anthems, and those kinds of things isn’t desperately helpful at this stage, that should all come later.”

In a United Ireland, Mr Meagher argued there would be no point in keeping Stormont in place.

He cited the idea of Metro mayors in the UK as something that could work in a United Ireland. While the idea of directly elected mayors has received a lukewarm reaction in the Republic in the past, he said the idea of giving more powers to regional cities and towns could have benefits for the whole of Ireland.

“Ireland has a similar problem to Britain with a big, important capital city that often drains opportunity from smaller provincial cities. They could look at the Metro mayor system in Britain. Devolution deals which are slowly giving more power and resources to the provincial centres. Something like that I think would be very beneficial for Ireland.

“People might look at it and say ‘oh that’s a British model’. But for places like Belfast, Derry, others in the North to have powerful elected mayors locally would be preferable to keeping Stormont.

“Keeping Stormont just wouldn’t work. Having two parliamentary assemblies on an island of seven million people where they’re a 90-minute drive away would be keeping it just for the status quo.

“Ireland needs things that would have real value rather than just for the optics. Really meaningful devolution would spread power better than Stormont anyway, more involvement, resources for local authorities.

“It could be beneficial in the South as well for places like Cork, Galway and Waterford. The Metro mayor model has been rejected before, in Cork and Waterford, but the argument was a bit cold then.

“It’s a conversation around what institutions will a United Ireland need, what will actually work and what will deliver value rather than just doing things for the sake of doing them? Public services, entitlements, benefits, and how to have more balance.

“How we align and integrate the economies of the two jurisdictions effectively, that could happen quickly. Some of the issues are quite practical, and you could move forward with them quickly.”

Mr Meagher said the cultural issues will prove more difficult, however, he argued that having economic and practical plans in place will make this process easier.

“The trickier ones are around culture, heritage, symbols, which is more difficult. You can’t tell an Orangeman to become a GAA supporter, and you shouldn’t expect to, what you need is a nice practical offer that will engage a lot of people, especially in the middle ground.

“We’ll have to take a good hard look and say ‘we’re back in the single market, back in the European Union’. If you’re a farmer in Antrim with a family farm for generations, and you’re a unionist and feel you’ll get a better deal with the EU… you are probably persuadable that you could live with a United Ireland. Or if you have a business in Belfast and are in a bind from Brexit, and could benefit from an EU supply chain, do you look and say ‘I would be better off in the EU?’ So that is a powerful argument.

“This year has got to be the year where we paint in the foreground, there’s been a lot of work done with Ireland’s Future, different public meetings, attracting lots of interest.

“We now need to look at economic analysis, policy analysis, the practicalities of all this need to take centre stage and become the focus of the debate.”

While Sinn Féin continue to cite Irish Unity as a key political issue, Mr Meagher said other parties are now starting to rank it much higher in their business as well.

“You can see the interventions of people like Neale Richmond in Fine Gael, Jim O’Callaghan in Fianna Fáil, I don’t agree with everything they say and that’s fine in this debate, but it shows there are people in the main parties thinking about this.

“Now it has matured an awful lot, there is a tendency in Dublin and in Westminster to endlessly kick the can down the road and hope that it doesn’t crystalise on your watch because it feels like a really big thing.

“Election results are telling us it can’t be ignored. Mary Lou McDonald could end up as Taoiseach with Michelle O’Neill as First Minister, the demand that something is done about this will be too strong.

“Hard election results, democracy, any criteria you can alight on to ask if there is demand for a Border Poll, is suggesting that there is.”