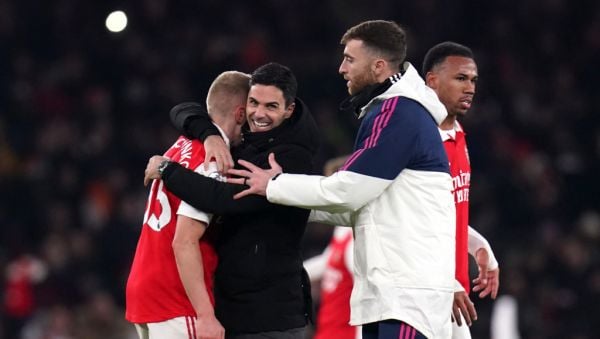 Arsenal left it late and Manchester City striker Erling Haaland was in a hurry as the Premier League’s top two continue to trade blows at the summit.

Eddie Nketiah’s 90th-minute winner maintained the Gunners’ five-point advantage over Pep Guardiola’s side, for whom their £51million summer signing continues to power his way to a seemingly inevitable record-breaking Golden Boot.

At the other end of the table the pressure eased on West Ham manager David Moyes while plunging former Hammers favourite Frank Lampard into more trouble at Everton.

The PA news agency looks at some of the weekend’s highlights.

Nketiah’s late instinctive finish decided a hugely entertaining game at home to Manchester United, whose recent bubble was burst at the Emirates Stadium. Marcus Rashford’s early strike enhanced United’s aspirations of joining the title race only for Nketiah and a Bukayo Saka stunner to turn things around. Lisandro Martinez’s header looked like earning a point before Nketiah turned home his second in the 90th minute.

Haaland at the treble

The City striker netted his fourth hat-trick of the season in a 15-minute spell either side of half-time. The prolific Norway international took his goal tally for the season to 31 in all competitions and only Alan Shearer, with five, has scored more hat-tricks in a Premier League season. Haaland’s current total of 25 goals would have won him the Golden Boot in more than half of the 30 seasons since 1992.

It was billed as the game where the loser would get the sack and Everton’s defeat at fellow strugglers West Ham sees Lampard clinging to his job just over a week away from his first anniversary at the club. A 2-0 loss at the London Stadium – a ninth defeat in 12 league matches – leaves his side second-bottom with leaders Arsenal and Liverpool their next two fixtures. Moyes, however, can breathe slightly easier for now after the Hammers climbed out of the bottom three.

Nottingham Forest are the lower reaches’ form team as a draw at third-bottom Bournemouth made it 12 points from the last 21. They have lost just once in that run and are up to 13th, four points clear of danger. The addition of experienced striker Chris Wood from Newcastle, who made his debut against the Cherries, has strengthened them further.

He may not have played since November but new Chelsea signing Mykhailo Mudryk produced an encouraging cameo in an otherwise dreary goalless draw at Liverpool. The 22-year-old Ukraine international could end up becoming the club’s second most expensive signing after joining in a potential £89million deal but was their liveliest performer in a 35-minute substitute appearance.