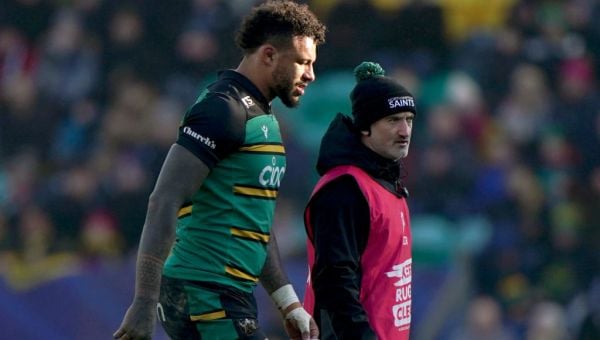 Courtney Lawes’ involvement in the Guinness Six Nations has been plunged into doubt because of the calf injury sustained on club duty for Northampton on Saturday.

Lawes has withdrawn from the England squad that was due to begin preparations for the opener against Scotland, placing his involvement in the Calcutta Cup clash on February 4th in major doubt.

It is another blow for the 33-year-old flanker who missed the autumn because of concussion before his comeback in a heavily disrupted season was further undermined by a glute issue.

A crisis is brewing at hooker after George McGuigan became the latest player in the position to withdraw from Steve Borthwick’s 36-man squad.

England had already lost Luke Cowan-Dickie to an ankle injury for at least the start of the Six Nations and on Saturday saw a question mark placed over Jamie George after he was concussed during Saracens’ defeat by Edinburgh on Sunday.

It meant McGuigan and Jack Walker, who are both uncapped, were the only fit hookers left in the squad but the Rugby Football Union has now announced that McGuigan has pulled out because of a knee problem.

Tom Dunn of Bath and Northampton’s David Ribbans will plug the gaps created in the squad as the clock ticks down towards Borthwick’s first game in charge.