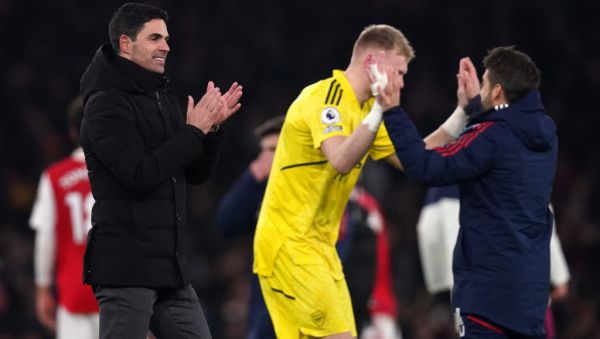 Mikel Arteta hailed Arsenal’s first half of the Premier League season as “extraordinary” following their last-gasp victory over Manchester United which moved them five points clear at the summit.

The Gunners ran out 3-2 winners following Eddie Nketiah’s late effort but, despite their lead at the top of the table, Arteta insists closest challengers Manchester City remain the standard bearers.

Marcus Rashford had put United ahead only for Nketiah to equalise and Bukayo Saka to put Arsenal ahead.

The visitors hit back through Lisandro Martinez’s first goal for the club before Nketiah flicked home a stray Martin Odegaard shot in the closing stages.

The win moved Arsenal on to 50 points from their opening 19 games of the campaign – a record for the club at this stage of the season – eclipsing even Arsene Wenger’s invincibles by five points.

“Extraordinary,” Arteta replied when asked on his thoughts on the first half of the campaign.

The Gunners maintain their five point lead at the top of the #PL 💪 pic.twitter.com/1biYfsDV5V

“It doesn’t get much better than that. We deserved the points that we have. I think we have played well enough to win most of the matches.

“But the reality is that we have things we can get better at. Attacking and defending in transitions. That’s the aim.”

Arteta, who worked as assistant to Pep Guardiola before taking the reins at the Emirates Stadium, will now take his side to face City in the FA Cup fourth round on Friday night.

They also still have two league meetings to come and Arteta believes everyone in the division is still playing catch up with City.

“I know my team so well,” he added. “They are good enough to play against these teams and they have done it. We talked about that in the last two or three days.

“We know our reality, we know still how much we have to improve, we know what’s taken us to the position we are today and we have to reinforce that every day.

“I know the levels of the other teams and one especially that has won in the last five or six years and we are not there yet.”

Your defence is in trouble!!! 🎶📞 #GodsPlan @Arsenal pic.twitter.com/Dw9ltLW7T7

Nketiah now has six goals in as many games since the World Cup, where Arsenal’s first-choice striker Gabriel Jesus suffered a knee injury that required surgery.

“What Eddie is doing is incredible,” said Arteta.

“I cannot say we saw that (coming). We were hoping that he could do that because of the way he is, his mentality, and how his qualities fit in the team.

“Losing Gabi was a big blow. It is a big blow losing Gabi today but Eddie is responding with the team in an exceptional way.”

United had been backed to stage an unlikely title bid of their own following a fine run of form but they drew at Crystal Palace on Wednesday before returning to the capital and slipping to defeat.

They now sit 11 points behind Arsenal having played a game more and manager Erik ten Hag admits he is not ready to start looking at any positives of Sunday’s performance.

“But in this moment I am annoyed and I also told the players: ‘If you want to win trophies, titles you have to change our mentality, because it’s not possible that you are in a top game making three such big mistakes where you concede’.

“Then especially the last goal, you have to feel the game. At that point, a point was the maximum. Then you have to take the point and you can’t give such a goal away like we did. And on top level, you can’t win trophies.

“It was like a pack of cards with the goals we concede. Two starting with a corner and then obviously we make mistakes, we didn’t show the discipline in the rules we have there. Then you concede goals.”