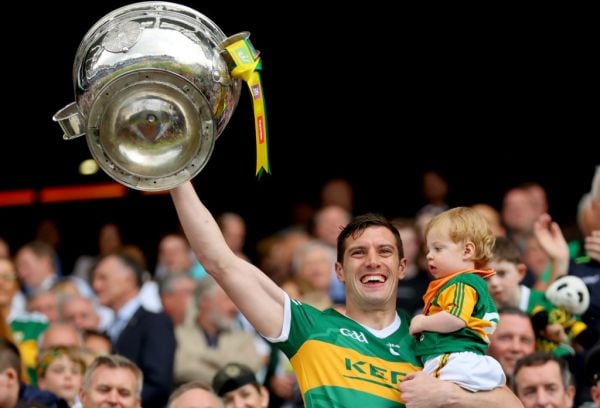 David Moran has announced his retirement from inter-county football after 14 years with the Kerry team.

Moran made his Senior debut for the Kingdom against Donegal in the league in 2008, and made his first championship-start the same season against Munster rivals Cork.

He would go on to make 53 appearances in the championship, scoring 1-23.

The Kerins O’Rahilly’s man was described as a “humble leader both on and off the field” in a statement from Kerry GAA on Monday confirming the news.

“Over his exemplary career in the Green and Gold, David has lifted the Sam Maguire on three occasions – the most recent, proudly on the Hogan steps with his son Eli in his arms.”

In addition to his All-Ireland Senior wins with Kerry, Moran also claimed four National League titles and 10 Munster Championships, and was twice named in the All-Star team of the year.

Moran added it was not a decision he took lightly.

“Playing with Kerry fulfilled all my boyhood dreams, however, with an aging body, a young family and a demanding work life I feel I can no longer give the commitment required to perform and compete at the top level,” he said.

The 34-year-old thanked his family for their “unwavering support”, as well as Kerry’s management team, backroom staff and supporters.

The country congratulated Moran on his “fantastic legacy” and for being a role model for players in both his club and county.

“We wish David, Sinead, Eli and all of his family all the very best in the future,” Kerry GAA added.