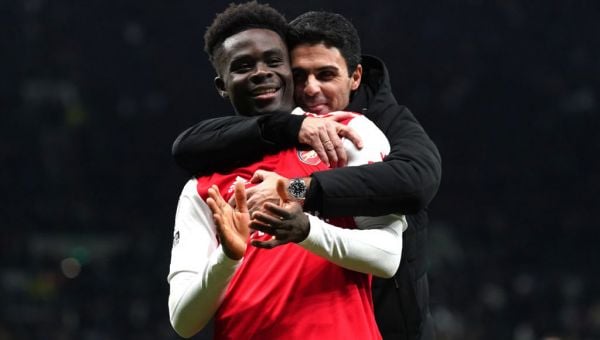 Eddie Nketiah’s late winner against Manchester United saw Arsenal open up a five-point gap at the top of the Premier League.

At the midway point of their season, the Gunners have amassed 50 points and are in a strong position to lift the title for the first time since 2004.

However, there is a long way to go for Mikel Arteta to replicate the achievements of Arsene Wenger and win the Premier League as Arsenal boss and here, the PA news agency looks at the tests that await his young team.

Manchester City remain Arsenal’s closest challengers and Pep Guardiola and his squad certainly have more proven know-how when it comes to getting a title bid over the line.

Four league titles in the last five seasons certainly gives City the edge when it comes to trophy pedigree and it will be up to Arsenal to prove they have the same staying power.

The summer signings of Gabriel Jesus and Oleksandr Zinchenko – both arriving from City – will no doubt help Arteta, who himself was an integral part of Guardiola’s coaching staff for two successful title-winning seasons.

Arsenal have dropped just seven points from their opening 19 games of the season, amassing an impressive 50 points to sit 11 clear of both Newcastle and Manchester United.

City are five points behind the Gunners and have the goals of Erling Haaland to push them on towards the ninth league title in their history.

The top two title protagonists not only meet in the FA Cup fourth round on Friday night but have yet to clash in the Premier League this season.

City visit the Emirates Stadium on February 15 with the return game in Manchester scheduled for late April.

Arsenal have not beaten City in the league since 2015, losing the last 10 meetings by an aggregate score of 26-3 and will need to address such a shocking run of results to keep ahead in the run-in.

Arteta has faith in a small squad which he has developed over recent seasons, with seven players starting all 19 league games so far this campaign.

Aaron Ramsdale, Ben White, William Saliba, Gabriel Magalhaes, Granit Xhaka, Bukayo Saka and Gabriel Martinelli have lined up for every game and that core of players has no doubt helped Arsenal find consistency and rhythm in their play.

Even losing Jesus to knee surgery allowed Nketiah to come into the side and shine but such is the size of Arteta’s squad that any other injuries could dent the balance of his team and their chance to get their hands of the trophy.

The January arrival of Leandro Trossard and the impending signing of Jakub Kiwior will help but Arteta will be keeping his fingers crossed that the nucleus of his team stays fit and healthy.